Why Is Land Conservation Important? 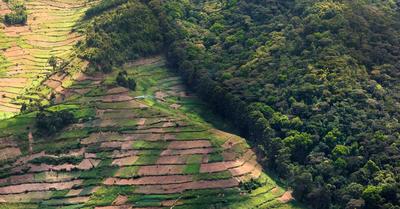 Healthy, productive land not only supports healthy wildlife, but its conservation protects critical processes we depend on to survive.

The world’s current deforestation rate is about 160,000 square kilometers or 61,700 square miles per year, jeopardizing the habitat of species present and the important services they provide like clean air, fresh water, and even recreation.This article will cover some of the most important ways that land conservation prevents destruction of these services and protects the wellbeing of species into the future.

In studying environmental policy in graduate school, I learned that protection of land and habitat has a domino effect on everything. From birds, to ocean wildlife, to growing food, land conservation is one of the foundations of environmental issues.

The goal of land conservation is generally to preserve the land as in its natural state as much as possible, making sure that it stays healthy and can support life well into the future. This often involves preventing certain types of development, but also can include land and habitat restoration or the conversion of developments back into more natural habitats.

How Is Land Conserved?

Land conservation can take a few different forms, and again can be intertwined with wildlife conservation. However, two of the most important types of entities that participate in conservation are governments and private organizations.

The US Environmental Protection Agency (EPA) is also involved in protecting land in the US, especially through the avenues of preventing pollution and hazardous waste as well as cleanup and restoration of land.

Governments are in an especially powerful position to impact conservation, as they can create and enforce regulations regarding the development and use of land, and have the power to protect public lands. However, this means that conservation efforts can also vary depending on the administration.

For example, the US president is the one who determines the director of the BLM. Since the BLM oversees public lands that can potentially be leased for oil and gas exploration, this has caused significant controversy over the protection of the lands versus their sale and the environmental and economic impacts of each decision.

Organizations like the Native American Land Conservancy (NALC), the Nature Conservancy, and the Natural Resources Defense Council (NRDC) all work to preserve and protect land and wildlife and advocate for conservation issues.

Organizations like these are also integral to protecting privately owned land, and often act as land trusts. Conservation land trusts work with private landowners to prevent development on their land, often through tools like conservation easements.

When private owners sign an easement, it signs over the rights to developing their land in certain ways to the land trust, who holds the rights in order to conserve the land. This reduces taxes for the landowner as well as protects the land from development in perpetuity, and can be tailored in order to address specific conservation needs while protecting needs of the landowner.

Why Is Land Conservation Important?

While the development of some land is important for housing, agriculture and other purposes, protecting natural areas and preserving their biodiversity provides countless benefits to our environment and to our health and well-being.

Conserving land and the wildlife that inhabits it is essential for the processes that provide us with clean air. Forests in particular act as carbon ‘sinks’, things that absorb more carbon dioxide than they release. Through photosynthesis, carbon dioxide is taken in by plant life, and oxygen is released.

Since human activities, especially agriculture and the burning of fossil fuels, release excess carbon dioxide and other greenhouse gases into the atmosphere, areas that remove it are essential to balancing this out.

This purification of air is referred to as an ecosystem service, something provided by ecosystems that benefits humans and is difficult for us to artificially replicate at the same scale.

While trees can (and should) be incorporated in cities to help absorb carbon dioxide and provide cooling effects, land conservation on a larger scale is essential to provide air purification that  combats the enormous amount of emissions that humans emit today.

In addition to air purification services, land conservation also ensures the protection of freshwater, which we need to survive.

Watersheds are an especially important part of this, as they help direct rainfall and snowmelt into freshwater areas like rivers and streams, and eventually to oceans and bays. Watershed areas depend on tree cover, so deforestation for things like agriculture can contaminate the water and cause floods and droughts.

Watersheds are often responsible for providing water to wildlife as well as to humans for drinking water, agriculture, manufacturing and recreation purposes. Some watersheds span thousands of miles, so land conservation is a crucial part of preserving this ecosystem service.

The conservation of land preserves wildlife and vital biodiversity by preventing habitat destruction. Biodiversity refers to the abundance and variety of life in a certain area, and its amount can vary depending on the type of ecosystem. Biodiversity is decreased, however, anytime land is deforested or used for development, since this disrupts wildlife and decreases the amount of habitat available for wildlife.

Land conservation is one of the essential ways that endangered species get protections in the Endangered Species Act (ESA). Once a species is listed as either endangered or threatened under the ESA, they receive certain protections which prevent certain types of development in their critical habitat.

Since land and habitat is so essential to the wellbeing of species, the ESA requires that sufficient space is allotted for the survival and restoration of endangered species and takes certain regulatory measures to ensure this. Development isn’t necessarily completely banned in an endangered species’ critical habitat, but it must be ensured that actions taken don’t destroy the habitat or jeopardize the species’ ability to survive there.

It is estimated that 291 species have been saved from extinction due to the Act, and its success emphasizes how important land conservation is in preventing extinction and protecting endangered and threatened species.

Scenic landscapes, state and national parks, and countless outdoor activities all depend on the conservation of lands.

Wild lands are not only those areas untouched by humans, but also areas that are used for things like skiing, mountain biking, backpacking, kayaking, and many other activities. Their preservation and protection from degradation and development determines if we can use them for these recreational purposes.

In addition to the actual preservation of these physical spaces, protecting these areas from things like floods, droughts, and wildfires are an important part of land conservation and an essential piece of maintaining these areas for recreation.

The presence of forests and other natural areas are a key part of mitigating against the impacts of climate change. The burning of fossil fuels in particular jeopardizes air quality and emits huge amounts of carbon dioxide, which as I discussed earlier is absorbed by plant life. Reforestation and the prevention of deforestation are integral to mitigating impacts of climate change by removing excess greenhouse gases from the atmosphere, slowing the effect these emissions have on warming the planet and causing severe weather patterns.