Which Biome Has The Most Biodiversity? 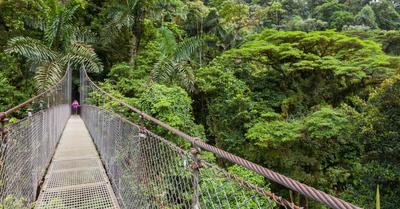 ‍Biomes are sections of our planet where various species thrive. But which Biome has the most Biodiversity?

Out of all the Biomes that are found on our planet, tropical forest Biomes are considered to be the richest in terms of Biodiversity. Half of the world's tropical woods are found in Central and South America. This also translates to plenty of diversity in terms of animal and insect life.

As one gets further from the equator and closer to the poles, variety tends to diminish. Around the equator, tropical rainforests may be found. Some claim that a consistent temperature climate is essential for biodiversity. Diversity is assumed to be influenced by the quantity of accessible energy or production, and tropical rainforests have enough of both.

Tropical forests are mainly found in the equatorial zone. Half of the world's tropical woods are found in Central and South America. With substantial annual rainfall and relatively steady, moderate temperatures, the climate in these biomes displays minimal seasonal change, which is why many species thrive in tropical forests. Phanerophytes, such as trees, lianas, and epiphytes, are the most common plants that are found in this biome.

Tropical forests are made up of an emergent layer of towering trees over 40 meters tall, an overstory of trees up to 30 meters tall, a sub-canopy layer of trees and tall shrubs, and a ground layer of herbaceous plants characterize tropical rainforests.

Of all the terrestrial biomes, they have the highest biodiversity and primary productivity. Net primary production can be as high as 2–3 kg. Because of the fast decomposition rates in wet, warm circumstances, this high productivity can be maintained even in extensively leached, nutrient-poor soils. Litter decomposes quickly, and mycorrhizae, fungal mutualists connected with plant roots, aid in fast nutrient absorption.

Over half of the terrestrial species on Earth are thought to be found in the tropical forest biome. In fact, tropical biomes are home to around 170,000 of the 250,000 vascular plant species that have been identified. In the 55 square kilometers of the Tambopata Reserve in southeastern Peru, 1,209 butterfly species have been reported, compared to 380 butterfly species in Europe and North Africa combined.

It should be noted that mangrove forest, seasonal deciduous forest, Evergreen rainforest, tropical cloud forest are among the sub-biomes that make up the tropical forest biome. Changes in seasonal patterns of rainfall, elevation, and/or substrate lead to the formation of these sub-biomes.

Tropical rainforests are found primarily in three areas: the Malaysian botanical subkingdom, which spans Myanmar to Fiji as well as the Philippines, Indonesia,Papua New Guinea,  Thailand, Malaysia,the Solomon Islands, Vanuatu, Thailand, as well as parts of Indochina and tropical Australia; tropical South, Central America, Indochina and particularly the Amazon basin; and West and Central Africa (see biogeographic region). Smaller swaths of tropical rainforest can be found throughout the tropics, wherever the climate permits.

Tropical rainforests are a treasure trove of biological diversity, as well as sinks for more than half of all atmospheric carbon dioxide absorbed by plants each year. They are communities with extraordinary biodiversity and a wide range of ecological interactions, as well as retaining many primitive plant and animal species.

The African tropical rainforest was the home of humanity's forefathers, and it is still home to our closest living cousins, chimps and gorillas. Tropical rainforests provided indigenous peoples with a diverse range of food and other resources, which they mostly used without destroying the vegetation or significantly diminishing its range.

However, in other areas, it is assumed that a long history of forest burning by locals has resulted in the widespread replacement of tropical rainforest and tropical deciduous forest with savanna.

Flowering plants (angiosperms) initially originated and diversified around 100 million years ago during the Cretaceous Period, when global climatic conditions were warmer and wetter than they are now.

The earliest tropical rainforests, which blanketed most of the Earth's land surfaces at the period, were the plant kinds that originated. Cooler, drier temperatures emerged only later, some 40 million years ago, in the middle of the Paleogene Period, allowing for the spread of various plant types across broad regions.

As a result, it's no surprise that the tropical rainforests, where flowering plants initially developed, now have the highest diversity of blooming plants. The fact that the majority of flowering plants with the most primitive characteristics are found in rainforests (especially tropical rainforests) in parts of the Southern Hemisphere, particularly South America, northern Australia, and adjacent Southeast Asian regions, as well as some larger South Pacific islands, is of particular interest.

The four levels of most rainforests are the forest floor, understory, canopy, and the emergent. Because of the different degrees of water, sunshine, and air movement, each stratum has its own distinct properties. While each layer is separate, they are all part of a larger system in which processes and species in one layer have an impact on those in another.

The emergent layer is the rainforest's top layer. The horizon is dominated by trees that reach heights of up to 60 meters (200 ft). On tree trunks, foliage is frequently sparse, but when the trees reach the sunlit upper layer, where they photosynthesize the sun's rays, it expands out. During protracted droughts or dry seasons, little, waxy leaves assist trees in the emergent layer retain water. Strong winds carry lightweight seeds away from the parent plant.

The canopy, a dense layer of plants about 6 meters (20 feet) thick, lies under the emergent layer. Over the two remaining levels, the canopy's thick network of leaves and branches acts as a roof. Winds, rain, and sunshine are blocked by the canopy, resulting in a damp, quiet, and gloomy environment below. Trees have developed glossy leaves with pointed points that resist water to adapt to this wet climate.

The dispersion of seeds is reliant on the wind however, many canopy plants enclose their seeds in fruit when there is no wind. Sweet fruit attracts animals, who devour it and then deposit seeds as droppings on the forest floor. Fig trees, which may be found in most tropical rainforests across the world, are perhaps the most well-known fruit trees in the canopy.

The understory, which is several meters below the canopy, is a darker, stiller, and more humid habitat. Palms and philodendrons, for example, are considerably shorter and have bigger leaves than the plants that dominate the canopy. The broad leaves of understory plants receive the limited sunlight that reaches beyond the thick canopy.

Here you are mainly going to find critters such as worms, slugs, termites, and fungus that live on the forest floor and play the part of decomposers. Organic debris falls from plants and trees and the decaying material is broken down into nutrients by these creatures. The nutrients are absorbed by the shallow roots of rainforest plants, while the decomposers are eaten by hundreds of predators.