What Is The Largest Biome On Earth? 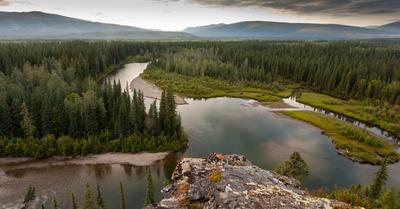 ‍Most people know the five major Biomes in the world are; the tundra, desert, forest, grassland, and aquatic. But, what is the largest Biome on earth?

For those of you who do not know, the largest Biome on earth is the taiga, also known as the Boreal forest, which is considered to be the largest land biome in the world.

Biomes have a huge role in our understanding of how ecology works. Researching Biomes helps scientists identify specific plants and animals, many of which are considered extremely important and fragile.

With the negative impact of global warming around us, it pays for us to get familiar with how biomes work and what we can do to protect them and the species that thrive in these environments. Since all species that live in these biomes are dependent on one another, it is crucial to protect this global biodiversity for future generations.

A biome is a geographical area on the earth's surface with unique environmental characteristics such as temperature and precipitation that favor only particular plant and animal species. This results in an ecosystem that is able to maintain itself despite its diverse adaptations.

Deserts, rainforests, and grasslands, for example, are biomes since they are located on the earth's surface and have a climate that is specialized to a distinct animal and plant life. Apart from the seas, the Taiga biome (Russian meaning "forest") is the world's biggest biome. It's also known as the boreal forest or the needle-leaf forest. The Taiga biome will be discussed in depth in this article, including its geography, climate, temperature range, and plant and animal species.

In order to thrive in this freezing environment, animals in the biome must have adaptive characteristics. There are more creatures seen throughout the summer than during the winter. This is due to the fact that most of these creatures either move to warmer biomes where they may thrive, particularly birds, or hibernate until the following summer season.

Birds from other biomes flock to the Taiga biome to nest and feed on these insects before returning to their home biomes at the end of the summer. Seed-eating birds like sparrows and finches, on the other hand, stay in the biome all year.

Herbivorous creatures can be found in areas of the biome that have more trees to eat. During the spring and summer, the abundance of snow in the Taiga biome results in ponds and water bodies that serve as breeding grounds for insects as well as a food supply.

Feeding patterns are unaffected. Because certain creatures need to eat throughout the winter, they adopt camouflage, which is widespread in species like the snowshoe hare. In cold weather, they can transform their fur coats from brown to white, allowing them to walk around in the snow without being detected.

This is something that bears are known for. They save enough food in their habitat to sustain them for six months when they see daylight again. Even birds might find it difficult to migrate when the snowfall rate is high.

The evergreen, unlike the birch and aspen trees, has green leaves all year, earning it the name 'evergreen.' Because chlorophyll is present in their leaves, they have enough of nourishment. Furthermore, this plant does not lose its leaves and retains the same leaves for an extended period of time, allowing it to utilize relatively little solar energy. As a result, the plant expands in width and length rather than producing a large number of leaves.

Plants must adapt in order to thrive in this sort of habitat. They must evolve unique characteristics that allow them to adapt to the Taiga biome's changing climate. Plants rely on leaves to produce their food, and this requires a lot of energy. The lack of sunlight in the biome is a deterrent, thus plants must have adapted leaves.

Various plant species may be found in the biome. These plants have evolved to withstand severe cold. Coniferous trees, evergreens, and spruces make up the majority of the biome. In the Taiga biome, conifers are the most common tree species. Other plant species are able to optimize light absorption despite the harsh climate. This is mainly because of their wide leafology. Lichens and mosses can also be found.

Tropical rainforests are warm because they are located between the Tropics of Cancer and Capricorn. Despite this, the Taiga biome is located near the Arctic Circle, the next major latitude above the Tropic of Cancer. This latitude's environs are bitterly cold. Furthermore, chilly winds bring Arctic air into the biome, making it exceedingly cold for the most of the year. As a result, this climate is referred to as subarctic.

Climate change threatens taigas in a variety of ways. The permafrost is partially melting due to the warming environment. Because this water has nowhere to go, muskegs have taken over more of the taiga. Only a few trees establish themselves.

The changing climate affects animal habitats as well. Native species are pushed out while non-native species are drawn in. The Siberian tiger, for example, is not accustomed to hot conditions. It has a thick coat and accumulates too much body fat to flourish in a moderate environment. Trees like spruce can be infested by non-native insects like the bark beetle. Hundreds of millions of tiny insects dig into tree bark to deposit their eggs. The trees that have been afflicted perish. Infestations of bark beetles may wipe out whole forests and hundreds of hectares of taiga.

The greatest significant threat to taigas, on the other hand, does not come from hunting. For houses, industries, and schools, civilization relies on strong structures. The taiga's trees are harvested for lumber, as well as paper, cardboard, and other commodities. For example, one of the most economically vital businesses in Canada is the export of wood and paper goods.

In the taigas, clearcutting is the most common method of logging. Clearcutting is the process of removing all trees from a certain region. This devastates the habitats of many species that live in and around trees, as well as making it impossible to establish new trees. In the taiga, clearcutting also raises the danger of erosion and floods. A taiga's soil can be blown away by the wind or eroded away by rain or snow if it lacks a root system to anchor it.

The taiga areas of North America and Eurasia are wide plant belts that stretch from the Atlantic to Pacific coastlines of their respective continents. The taiga covers most of Canada and Alaska in North America. True taiga ends just north of the southern Canadian border, despite the presence of comparable transition forest types in the northern tier of the lower 48 United States.

Asia's huge taiga stretches over Russia and into northeastern China and Mongolia to the south. Taiga covers the majority of Finland, Sweden, and Norway in Europe. Although a tiny, isolated region of boreal woodland in the Scottish Highlands lacks several continental species, it does include the Eurasian taiga's most widespread conifer.

Within the boreal zone, it has the most species diversity, the warmest soils, the best production, and the longest growing season. The lichen woodland, which is located north of the closed-canopy forest, is a smaller parallel zone of sparse woodland in which treetops do not create a closed canopy. A large majority of the ground cover is made up of lichen mats and tundra-like flora. Forest-tundra, which occurs at the northern border of tree development, sits to the north of the lichen woodland.