Soil conservation is the practice of protecting and improving soil quality. It is a local, national, and global concern. Soil conservation efforts are working hard with local communities across the globe to improve the health of the soil so there will be enough for future generations.

Soil conservation is an essential part of sustainable agriculture. It's also a crucial aspect in many other practices, such as reducing greenhouse gas emissions and protecting groundwater sources. Soil conservation strategies can be applied to farming, forestry, mountain areas, rivers and streams, wetlands and water bodies, urban environments, rural communities etc.

We had the pleasure of talking to various soil experts about the state of soil conservation in today's modern world. We were able to ask them how people can help and what they think about this issue. This blog will help in the spreading of knowledge about soil conservation.

Soil is the foundation of our food production, and without it, we would not be able to grow any crops. It's also a large contributor to our water cycle and produces around one-third of the world's oxygen. With that said, soil conservation is extremely important for many reasons.

The most popular reason that people don't think about is money. Farmers are dealing with the costs of having to cultivate healthier soil by applying more resources than they already do. The EPA says it can cost up to $7 million per year on average to implement sustainable farming techniques. This isn't only an issue in America either; this phenomenon runs throughout other countries like Canada, Australia, India, China, & others, where farmers face serious obstacles due to depleted soil quality.

Soil conservation affects the land around as well. It's not just about growing plants, which is just one part of how everything works together naturally. For example, suppose you have a forest with little to no trees due to deforestation. In that case, there's probably not enough oxygen being produced for animals. They are likely to die off due to a lack of habitat. The overall goal of soil conservation is sustainability within our natural environments.

Soils have many functions besides just providing the basic necessities for plants. Wetlands & forests absorb and store carbon dioxide. Soil cleans water as it percolates below ground and delivers nutrients to plants and animals, and contains resources such as limestone and coal that we use today. Without healthy soils, there is no life on earth!

Many conservation methods can be applied to various elements of soil to improve its overall health. Some things may work for some areas but not others, so it's up to the experts to come together and create a plan that works best for you.

Here are some ways how people are currently conserving their soil:

No-till farming is a method of growing crops where the soil is kept undisturbed between seasons. Crops are instead planted directly into the previous year's residues, which are typically residue from wheat or corn stalks. This way, you don't have to disturb the natural ecosystem in any way. It reduces pollution by reducing erosion while conserving soil moisture at the same time.

Contour farming technique aims to prevent water runoff and soil erosion by keeping slopes at an angle. Farmers use this technique for small areas like fields, gardens etc., where slope gradients are less than 15 degrees. This prevents land from eroding into nearby river systems or other sources that can be used as drinking water & affect wildlife living there.

Terracing is a farming technique where farmers create flat areas (terraces) on the sides and top of hills. This allows for easier access to watering crops and protects them from animals, soil erosion etc. This farming method can also improve grain yields and soil moisture content by 44.8% and 12.9%, respectively.

This method was invented in Peru over 2000 years ago by the Incan civilization but is used mostly in undeveloped regions like India & Thailand. Terracing can be as simple as making mounds out of rock or as complicated as multi-level layouts with drainage systems built into them. To build terraces, farmers must first cut into the sides of steep hill slopes then pile up rocks/dirt before smoothing it out, so plants have a firm foundation to grow on.

Terraced farms use several conservation techniques that include:

Cover crops are used to protect the soil from erosion & runoff, increase crop yields and fertility, or simply act as a decorative element in or around gardens. They also work alongside no-till farming techniques by replacing sunlight that is lost while some plant residues decompose.

It has been known that planting cover crops on fields can reduce erosion by 80% while increasing soil organic matter up to 15%. These plants absorb water through their roots then release it into the air for evapotranspiration. This increases moisture availability during dry spells typically caused by seasonal weather changes. Cover crops include things like vegetables, grain legumes etc. There are even cover crops that you can buy at home improvement stores/ nurseries instead of planting the traditional cover crops mentioned above.

Cover crops use several conservation techniques that include:

This is a farming technique in which two or more types of crops are alternated. Strip cropping like contour farming prevents erosion & runoff, increases crop yields and fertility, and simply acts as a decorative element in or around gardens. A common strip cropping method includes planting strips of grasses that will hold the soil together rather than growing rows of corn/crops in between that can be harvested later.

Windbreaks are rows of trees, shrubs etc., planted to help protect crops from harsh winds, improve soil quality (through organic matter added to the ground), and prevent erosion on hillsides. They also create shade that helps crops grow better by reducing evaporation which is caused by sunlight.

Windbreaks use several conservation techniques that include:

Crop rotation is the practice of changing what you plant in a certain area on a regular basis. This can be done by rotating rows, strips or fields into crops that are best suited for the current situation. Crop rotation helps prevent pest buildup and increase soil fertility, allowing plants to reach their full potential without harmful chemicals/ pesticides.

Soil conservation provides several benefits to people in general and farmers in particular. This agricultural practice contributes to sustainability in various ways:

Soil conservation techniques help prevent topsoil from being blown away by the wind. This is beneficial because the topsoil that is lost contains all of the nutrients in a particular area. With erosion, it becomes difficult to grow crops on land with sand and dirt on it.

Another way soil conservation helps sustain our environment is by limiting runoff & sediment buildup, which can cause water pollution. This can ultimately lead to toxins being present in our food supply. Soil ensures that pollutants are less likely to get into waterways, where they would harm aquatic life, fisheries, and drinking water supplies.

In addition to wildlife conservation, soil conservation also helps sustain the environment because it reduces the risk of certain diseases and illnesses for humans. For example:

Soil conservation techniques also help with increasing crop yields. This is beneficial to farmers because they can make more money from their crops and have higher efficiency during harvest seasons.

As plants grow, they absorb carbon dioxide released through the decomposition of dead plants or animals. This process produces oxygen for us to breathe!

Adding organic matter while decreasing erosion will lead to an increase in soil nutrients over time. This is due to the increased amount of carbon and nutrients in the soil for plants to use as they grow.

Without soil, there would be no way for plants to absorb water from the ground, so it would all just run off into our rivers and other waterways. When soil is present, it provides a sponge-like effect. It absorbs and retains moisture allowing us to use fewer freshwater resources in agriculture and industry.

Conserving soil and not having it all washed away by water means that crops will be cleaner and healthier for consumers to eat. This also reduces the number of pesticides needed to keep pests under control which is beneficial from a human health standpoint, as those chemicals can negatively affect our bodies if consumed in large quantities. 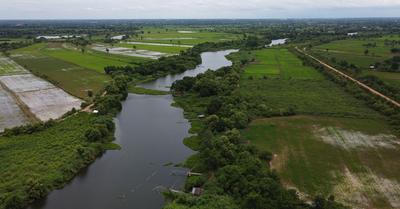