There are five major types of biomes on this planet, but there are many people who are confused about what a marine biome is.

A division of the aquatic biome, the marine biome is characterized by the presence of salt water and is home to some of the most amazing creatures on the planet. The oceanic ecosystem also includes freshwater biomes and is home to many plants and animals. Over 90% of all life lives in the ocean which makes it an extremely important biome.

With the amount of pollution and plastic waste being emptied into the oceans, it pays to learn more about this amazing biome and the living organisms that live in it.

As marine biome experts, we are in the ideal position to give you all of the information you need on this unique and extremely large ecosystem including marine ecology, its climate, and the animals and plants that call it home.

The marine biome's average water temperature is 39 degrees Fahrenheit (4 degrees Celsius), however it can be cooler or warmer depending on location. The temperature of shallow waters or those near the equator will be greater than that of those towards the poles. The depth and temperature of the oceans have a significant influence on all species in the marine biome.

The food chain in these areas is built on bacteria that use chemical processes to obtain energy, a process known as chemosynthesis. Coral reefs may grow in shallow ocean environments. These formations resemble rock shelves, but they are constructed of corals, which are living organisms with a calcium carbonate skeleton.

Coral reefs are very varied, with over a thousand different fish species living on them. Coral reefs are currently threatened by human-caused climate change, which has resulted in the ocean becoming hotter and more acidic. Coral reefs may be found all over the world in warm shallow seas. They can be found as barriers around continents, fringing islands, and atolls (for example, the Great Barrier Reef off the coast of Australia).

Corals are the most common creatures in coral reefs. Corals are fascinating because they contain both algae (zooanthellae) and animal polyp tissues. Due to the nutritional deficiency of reef waters, corals absorb nutrients from algae via photosynthesis and by spreading tentacles to capture plankton from the sea. The fauna includes a variety of bacteria, invertebrates, fish, sea urchins, octopuses, and sea stars, in addition to corals.

A broad diversity of species live in marine water, and their survival is dependent on the existence of sunshine and nutrients. Because decaying organic waste falls to the sea floor, where it becomes available to marine species, coastal marine ecosystems are able to retain more nutrients than deep ocean ecosystems. In a marine environment, nutrients are swiftly recycled and do not build up on the seafloor like soil does in a terrestrial forest.

The water and creatures that spend their lives floating or swimming in the ocean make up the pelagic zone. Plankton float in ocean currents and form the foundation of the marine food chain, whereas nekton, as in fish, whales etc., swim and devour plankton and smaller species.

The aquatic biome is the biggest of all biomes, occupying over 75% of the planet's surface. Freshwater and marine biomes are the two most common classifications for this biome. Freshwater ecosystems typically contain less than 1% salt. Marine life, on the other hand, must be adapted to surviving in an environment with a high salt content. Ponds, lakes, rivers, and streams are examples of freshwater habitats, while the ocean and salty seas are examples of marine ecosystems.

Lakes and ponds are both freshwater bodies that are stationary, albeit ponds are smaller than lakes. There is a variety of life in the shallow, sunlit waters, including many fish species. Decomposers, on the other hand, flourish in the deep, dark waters.

The ocean is a vast saltwater body that covers the majority of the Earth's surface. Life in the ocean, like life in ponds and lakes, is suited to certain areas of the water. Many species manage to survive in the deepest sections of the ocean, which are too dark to sustain photosynthesis.

As waves and tides pour in and out, the intertidal zone is where the water touches the land. As a result, the communities are always shifting. The zone is vertically stratified on rocky beaches. There are just a few types of algae and mollusks where only the highest tides reach.

There is a more diversified variety of algae and tiny creatures, such as herbivorous snails, crabs, sea stars, and small fishes, in those places that are generally submerged during high tide. Many crustaceans, fish, and seaweed may be found in the bottom of the intertidal zone, which is only exposed at the lowest tides.

On sandier coasts, the intertidal zone is not as stratified as it is on rocky shores. Clams, crabs, and shorebirds are among the species that have established themselves due to the continual movement of muck and sand.

The benthic zone is the area under the pelagic zone, however it does not extend to the deepest parts of the ocean. The zone's bottom is made up of sand, slits, and/or dead animals. Temperature lowers as depth increases into the abyssal zone due to the lack of light. Seaweed dominates the flora, while bacteria, fungus, sponges, sea anemones, worms, sea stars, and fishes populate the fauna due to the abundance of nutrients.

All seas beyond the continental shelf, effectively the whole ocean, are included in the pelagic zone. The pelagic zone is typically cold, although estimating a temperature range is challenging because, like ponds and lakes, the pelagic zone has thermal stratification, with warm and cold ocean currents continually mixing.

The abyssal zone is the ocean's deepest section. This area's water is very cold (about 3° C), highly pressurized, and oxygen-rich, yet nutrient-deficient. The abyssal zone is home to a variety of invertebrates and fish. Mid-ocean ridges can be found in this zone at the ocean bottoms, usually accompanying hydrothermal vents. 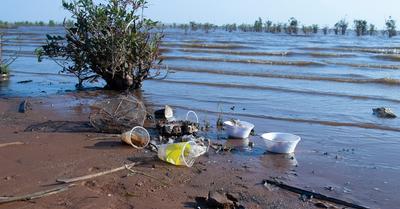