What Biome Is North Carolina? 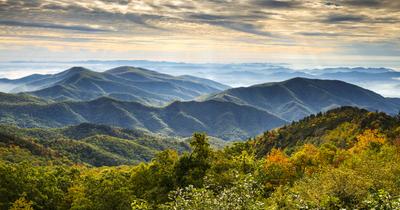 North Carolina is one of the most beautiful states in our nation - with stunning nature and rich biodiversity, but what biome is it?

If you have ever had the pleasure of traveling through the majestic state of North Carolina then you probably got to witness the enchanting magic of its rich and vibrant nature. This state has a reputation for being one of the most beautiful places in the United States - and for good reason, as it is home to the temperate deciduous forest that makes up the majority of its landmass. This forest is beautiful just like many forests, but the temperate deciduous forest is unique for its own characteristics, which can be defined by the various plant and animal species that inhabit this biome.

To help you understand everything you need to know about North Carolina’s biome, we are going to take a closer look at the temperate deciduous forest in detail.

Here in the United States, we are blessed to have millions of acres of undisturbed natural wonders that have been preserved in their pristine state throughout history. One of our nation’s prime spots for experiencing nature is in North Carolina, where you can visit the temperate deciduous forest.

This type of forest is commonly seen throughout much of the east coast of the country, as well as parts of the Heartland. This provides an incredible retreat for everyday citizens to escape into nature, which can easily be accessed - given that the temperate deciduous forest is so apparent in this region. That’s why every weekend, millions of people get in their cars and escape the hustle and bustle of the city to come to visit the beautiful forest that surrounds our urbanized areas.

The temperate deciduous forest sees many changes throughout the year, which is why the 4 seasons are so apparent along the East Coast of the United States. In fact, a deciduous forest is classified based on how much it changes throughout the year. This type of forest can be spotted based on whether or not it sheds its leaves - with bright autumn colors in the fall, barren branches in the winter, blossoming flowers in the spring, and lush green forests in the summertime.

This sort of seasonal change gives the North Carlina biome a lot of variation, which provides a different kind of beauty throughout the entire year. These adverse conditions mean that the plants and animals that depend on this biome need to make careful and calculated decisions so that they can adapt to the seasonal changes. To illustrate this further, we are going to take a closer look at some of the characteristics and inhabitants of the temperate deciduous forest.

The temperate deciduous forest is a biome that goes through a lot of different weather patterns. This land area is notorious for displaying all 4 seasons very distinctly, which means that you can expect the climate to fluctuate significantly throughout the year.

The average temperature of the temperate deciduous forest will range from 48 to 55 degrees Fahrenheit throughout the year, but you can expect summers to be warmer with an average temperature of roughly 75 degrees Fahrenheit, and winters to get blisteringly cold and drop to the low 20s. The summers are usually relatively dry with occasional rains and winters will have plenty of snow.

The amount of rainfall that the temperate deciduous rainforests gets can be as little as 25 to 35 inches - or as much as 55 to 60 inches during really wet years. These sorts of fluctuations can make predicting the climate of North Carolina’s biome a bit challenging, as each year is a bit different from the next, but you can expect all 4 seasons to be represented in one way or another.

The animals that inhabit the temperature deciduous forest need to approach their survival with caution, as they not only need to prepare to escape predators but also to cope with the contrasting weather patterns.

This can make surviving in North Carolina’s biome year around a challenge for many animals and a lot of them need to take drastic measures to live in this region. That is why some species such as birds tend to migrate somewhere down south during the winter months to escape the cold. The animals that stick around through the winter need to be extremely well prepared and resourceful in order to survive. This means that animals need to often hibernate during this time period.

With that being said, you will find plenty of different animals roaming North Carolina’s biome such as:

During the summertime, you will find plenty of these critters around the temperate deciduous forest, but during the winter, they will likely have left for the season or are in a deep sleep, which is why you want to tread lightly so as not to disturb someone’s hibernation.

Let’s take a closer look at some of the different plant species that can commonly be found in the temperate deciduous forest:

As the summer begins to wind down, you will start to see leaves within the forest become a beautiful golden/scarlet color, which creates an enchanting scene of vibrant colors. By the time the winter approaches, these plants will have all shed their leaves and you will be able to see the winter wonderland of North Carolina in full swing.

Right around the time that the animals start coming back on the scene, so do the plants, as trees and shrubs begin to bud and grow their early leaves. In the summertime, plants are full of life and are filled with lush green leaves that are as inviting as they are beautiful.