What Biome Do Wolves Live In? 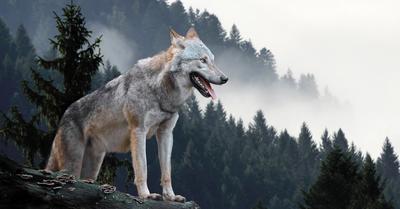 ‍Wolves are known as habitat generalists, which means they are adaptable to the habitat they live in, but what biome do wolves live in?

Wolves play an important part in the ecosystems in which they live. Therefore, knowing more about their biomes can help us figure out the best way to take care of their environment, so they're able to thrive.

As mentioned, wolves are habitat generalists, so this means that they're actually found in different biomes. However, wolves mainly thrive in the Siberian Taiga biome. You will also find Arctic wolves in the tundra, Arabian wolves in the deserts, and Eurasian wolves in the grassland biome.

Whichever biome wolves are found in, they have a key role in keeping those ecosystems healthy. For instance, they help keep the elk and deer population regulated, and the carcasses they leave behind end up being food sources for scavengers as well as other smaller animals.

It is without a doubt that wolves are a crucial part of any ecosystem, which is why, as experts in various biomes, we can provide you with all the information you need on the biomes that wolves thrive in.

While wolves can be found in various ecosystems, they thrive in the Siberian Taiga biome. The Siberian Taiga is a large forest encompassing hundreds of thousands of square miles in Russia's far north. It is an extremely chilly region for most of the year, with temperatures as low as -80 F.

The summer is brief but scorching, with temperatures reaching 105 degrees Fahrenheit, while the average temperature throughout the year is below freezing. The Taiga's ground is coated with permafrost due to the extreme cold. Permafrost is a soil layer that is constantly at or below freezing temperature. It is not always covered in ice sheets, but water droplets in the soil are microscopic ice crystals rather than liquid.

This hardens the soil to the consistency of rock, preventing tiny plants such as grasses and shrubs from establishing roots in the topsoil. There is a lot of precipitation, although it generally comes in the form of snow rather than rain. The cold creates a unique vegetative ecosystem that is not found in any other part of the world.

The majority of the forest is made up of several species of larch, a coniferous tree genus. The Larch trees are considered to be deciduous, which means that they lose their needle-shaped leaves at different times of the year. These trees are tall and dense, obstructing most of the sunlight that reaches the forest floor.

Direct human activity and climate change pose a danger to taiga ecosystems. Foxes and bears, for example, have traditionally been hunted in the Taiga. For thousands of years, its warm fur and strong skin, which has been transformed into leather, have helped people live in difficult conditions.

The Taiga is home to a diverse range of creatures. All creatures must be able to withstand the cold. During the cold winter months, birds endemic to the Taiga migrate south. Small creatures, primarily rats, like to reside near the ground. From the Taiga's trees, several birds of prey, including owls and eagles, pursue these creatures.

The world's biggest animal, the moose, can survive in the frigid Taiga. Moose, like other deer, are herbivores. They like the aquatic plants that occur in the bogs and streams of the Taiga.

The Taiga is home to a small number of huge predatory species. Bears and lynxes can be seen in abundance. The Siberian tiger, which weighs 660 pounds and is the world's biggest cat, is a native taiga species.

Taigas are densely forested areas. Coniferous trees such as spruce, pine, and fir can be found in abundance. Coniferous trees have needles instead of wide leaves, and their seeds develop inside woody cones that shelter them from the elements. Conifers never lose their needles, unlike deciduous trees in temperate woods, which lose their leaves in the winter. Conifers are often known as "evergreens" because of this.

Conifers have evolved to withstand the Taiga's long, harsh winters and short summers. Their needles have relatively little sap in them, which helps to keep them from freezing. Their dark tint and triangle-shaped sides assist them in catching and absorbing as much light as possible. Tree growth is thickest in the Taiga around muskegs and glacier-formed lakes.

Apart from conifers, the Taigas have little natural vegetation. The Taiga's soil is deficient in nutrients. It can also freeze, which makes it impossible for many plants to establish themselves. The larch is one of the few deciduous trees that can withstand the harsh conditions of northern Taiga. Mushrooms and moss cover the Taiga's floor instead of plants and flowers. These creatures have very shallow roots or can grow straight on the ground. They can withstand the cold, as well as a lack of water and sunshine.

What You Need to Know About Wolves

Wolves are an essential component of a healthy ecology. A predatory species, such as the wolf, is frequently but not always a keystone species. Predators can regulate the distribution, population, and behavior of enormous numbers of prey species while being outnumbered by their prey.

Wolves indirectly influence plant and tree regeneration by influencing prey migrations, browsing patterns, and foraging behavior (predation risk effects). Wolves have a trickle-down impact on animals and plants in this way, which is known as a "trophic cascade." Wolves have been seen to have an indirect influence on birds, rivers, fish, butterflies, and trees when they are present in an environment.

Gray wolves can thrive in a variety of biomes as long as there is enough food and a chilly environment. One of the greatest places for them is the Siberian Taiga, which is a boreal forest with long, harsh winters and short summers. It encompasses a large portion of northern Russia, which is home to the most wolves. Every wolf pack has its own territory, which may be rather large.

Wolves eat elk, deer, moose, and other ungulates, but they also eat smaller animals like squirrels, rabbits, beavers, and so on. Other top carnivores, such as cougars, bears, and coyotes, may compete with them. The presence of wolves has been found in other regions to diminish coyote numbers.

Wolves may affect the dynamics of animal species across an ecosystem in these and other ways, changing predator-prey ratios and even the natural environment. While wolves may have an impact on the abundance of some species, they can also have a significant environmental impact.

This can boost the proportion of healthy animals of prime-age in ungulate herds that haven't been exposed to wolves in a long time, resulting in greater conception and birth rates. Wolves normally hunt in groups of approximately five individuals, although in Washington, up to 15 have been seen. They pursue their prey via open terrain. With an average home range of 140 to 400 miles, packs are fiercely territorial.

Why Are Wolves Important?

When a dominating predator leaves an ecosystem, the next biggest hunter takes his place at the top of the food chain. When wolf populations decline, there are no big predators that can fill their precise niche, and coyotes are the next species in line to take over.

Coyotes specialize in hunting mid-size to smaller prey, whereas wolves typically prey on larger animals because of their larger size. The numbers of martens, badgers, and foxes which compete with coyotes for rodents and other small prey are beginning to fall as the coyote population grows. At the same time, huge prey animals that were formerly pursued by wolves, such as elk and deer, began to overpopulate, robbing highlands of their vegetation.

At the same time, big prey animals that were formerly pursued by wolves, such as elk and deer, began to overpopulate, robbing highlands of vegetation and decimating streams of important aspen and willow cover. With fewer elk corpses to eat, scavengers such as magpies, ravens, and bears, who were previously reliant on remnants from wolf kills, must go for sustenance elsewhere.