What Biome Do Snow Leopards Live In? 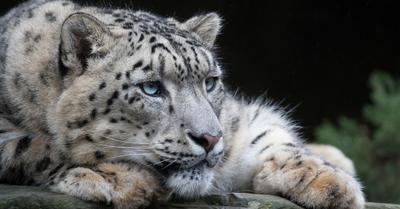 ‍Hearing the word "snow leopard" might lead you to think that they live in the tundras. However, is this the case? What biome do snow leopards live in?

While the snow leopard is no longer on the endangered species list, they have evolved to live in some of the harshest conditions on the planet, which only puts them at a higher risk. This is reason alone to learn more about these fascinating creatures to ensure that they remain off the list of endangered species.

While the WWF and many other organizations are working to conserve the future of the snow leopard, there's still a lot that needs to be done to ensure these elusive animals not only survive but thrive. It all starts with making sure more and more people are educated on the biome and ecosystem of the snow leopard.

Snow leopards may be found in the high mountains of northern and central Asia, especially the Himalayan region. The snow leopard resides in high alpine locations in the Himalayas, generally above the tree line and up to 18,000 feet in height. Pakistan, Nepal, Russia, China, Mongolia, and Bhutan are among the nations where they may be found.

Snow leopards have thick fur with spots all over their body. The WWF uses spot patterns to identify individual snow leopards when performing camera trap research. Snow leopards have long, thick tails to balance on rocks and wrap around their bodies to defend themselves from predators.

Snow leopards also have extremely long, thick tails that they use to balance on rocks and wrap around their body for warmth. They are extremely agile thanks to their small forelimbs and large hind limbs, and they may jump as far as 50 feet. They also have huge, hairy paws that serve as snowshoes as well as protection from sharp rocks.

Snow leopards can kill animals three times their own body weight. Sheep, ibex, and other small mammals are among the animals they consume. Local populations also hunt the animals that snow leopards generally hunt, such as the Argali sheep. Snow leopards are frequently driven to murder cattle since their natural prey becomes harder to come by.

The snow leopard dwells largely above the tree line and has a habitat range of roughly 80,000 square miles in Pakistan. It may be found in the Hindu Kush range in Khyber Pakhtunkhwa's Chitral district and the Karakoram Range. The snow leopard population here is believed to be approximately 200. Avalanches are becoming more common in Pakistan's Hindu Kush Himalayan area due to climate change. Not only does this have an impact on the snow leopard's prey, but avalanches can also kill the snow leopard.

Snow leopards are about 30-60 inches long from head to tail tip, with the tail adding another 30-40 inches, making them smaller than other big cats. Snow leopards typically weigh between 55 and 120 pounds, while some huge males have been known to weigh up to 160 pounds.

Snow leopards are found in central and south Asia's harsh, snowy, and mountainous alpine environments. They may be found in 12 different countries at elevations ranging from 9,000 to 15,000 feet. The optimum environment for snow leopards is dismal, hazardous, cold, and barren — not everyone's idea of a pleasant place to live.

The leopard's big, strong chest lets it take deep breaths, which aid in oxygen absorption from the thin, high-altitude air. Snow leopards are thought to have more efficient hemoglobin than other cat species, allowing them to transfer oxygen throughout their bodies in their blood more efficiently. However, this has since been discovered not to be the case; therefore, we just don't know how snow leopards manage to survive at such high altitudes.

Snow leopards are migratory, travelling about their home regions frequently to hunt and leave marks that deter other cats from entering. These cats frequently move along ridgelines and cliff bases, and they like to sleep in areas with nice views of the surrounding environment.

The amount of area required by each snow leopard varies depending on the landscape. This, according to researchers, is dependent on the availability of prey. Cats may live in home ranges as small as 10-25 square miles in locations where prey is plentiful. Snow leopards require larger habitats to hunt in locations with less prey, and their home ranges can be over 380 square miles.

The Alps, Rocky Mountains, and the Andes are examples of Alpine biomes found in mountainous places worldwide. The alpine biome is found between an elevation of roughly 10,000 feet and the point where a mountain's snow line begins.

Because of its great altitude, the Alpine biome defines an ecosystem that lacks trees. These biomes may be found in mountainous areas all around the world. Their altitude is usually between 10,000 feet and the point where a mountain's snow line begins. Because the dynamic circumstances of Alpine biomes are not conducive to plant development, just around 200 plant species live there. Cold and windy weather, as well as intense sunshine, define these places. Furthermore, at high elevations, there is a limited supply of carbon dioxide for photosynthesis.

Alpine biomes have a rather changeable climate. You can't use a basic climate scheme to describe the climate of this type of biome. As you climb a mountain, the temperature drops by around 10 degrees Celsius for every 3000 feet. The biome has a lengthy, frigid winter season that lasts around nine months. Summer temperatures typically range from 40 to 60 degrees Fahrenheit. However, within a day, these temps can change from mild to cold.

The amount of precipitation in alpine biomes varies a lot, yet they're typically dry. In actuality, the regions receive around a foot of rain every year. Despite this, because of the constantly cold temperatures, snow may linger on the ground for a lengthy amount of time.

Bright winds, abnormally low temperatures, low carbon dioxide levels, and strong sunshine define the alpine habitat, which makes it difficult for plants to survive. Plants have a difficult difficulty doing photosynthesis when there is a lack of carbon dioxide.

Alpine biomes are characterized by little groundcover plants due to the windy weather. It takes longer for these plants to develop and propagate. They keep as close to the ground as possible to protect themselves from the cold and wind. Furthermore, these plants degrade slowly after death due to the low temperatures. As a result, the soil is in terrible condition. The majority of plants in alpine biomes have evolved to flourish on rocky and sandy soil.

Animals in the alpine biome must be modified to deal with two sorts of problems: cold and high UV radiation exposure. Many warm-blooded animals and a few bug species live in this area. How do these creatures cope with the cold, though?

Hibernate, migrate to warmer climates, or protect their bodies with hair and fat layers. Furthermore, these creatures' legs, ears, and tails are usually short, which helps to reduce heat loss. They also have bigger lungs and more blood cells in their bodies. Alpine animals' blood has the ability to function at lower oxygen levels than those found at higher elevations.