What Biome Do Polar Bears Live In? 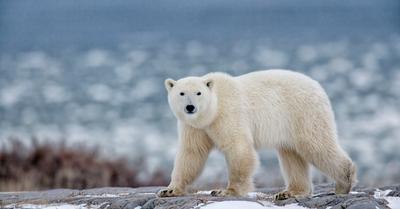 ‍Polar bears are usually found in the Arctic. While we know that they're found in mostly colder regions, what biome do polar bears live in?

The polar bear has played a significant role in the cultures and even in the economies of arctic people. However, due to climate change and the melting ice caps, polar bears are more restricted when it comes to hunting for food, which is why they are sadly a threatened species under the Endangered Species Act. But what biome do they live in? And how is this biome being affected?

As the name implies, polar bears can only be found in the Arctic Tundra. These mysterious creatures live in the extreme cold of the Arctic, Alaska and Siberia. They have adapted to life there via their coats and are the apex predators of the biome.

According to scientists, there are just around 26,000 polar bears left in the world, and their numbers are falling due to the harmful effects of climate change, which is melting the polar ice caps far quicker than anticipated. This alone is reason enough for us to try and learn more about polar bears and their habitat so that we can protect these creatures from the threat of total extinction.

If you are looking for more information on polar bears and the biome they thrive in, then you're at the right place. We are the experts when it comes to the various biomes and ecosystems found on earth, including the biome where polar bears live, and can give you all the information you need on their unique habitat.

‍Polar Bears – The Apex Predators of the Arctic

Polar bears, the world's biggest bear and the Arctic's top predator are a potent emblem of the Arctic's strength and endurance. It's a fitting moniker for this magnificent creature, which spends much of its existence in, near, or on the ocean – most notably on sea ice. Alaska is home to two polar bear subpopulations in the United States.

Polar bears spend more than half of their time searching for food. Depending on the time of year and other factors, a polar bear may only catch one or two out of every ten seals it hunts. Because they require significant amounts of fat to thrive, they mostly eat ringed and bearded seals.

Polar bears use sea ice for various purposes, including mobility, hunting, resting, mating, and, in certain cases, maternity dens. However, in May 2008, polar bears were designated as an endangered species in the United States under the Endangered Species Act, owing to the ongoing and possible loss of their sea ice habitat due to climate change. Polar bears are also skilled swimmers who can maintain a top speed of six-mile-per-hour. They are protected from chilly air and water by a thick layer of body fat and a water-repellent coat.

Today, polar bears are one of the few big carnivores that may still be found in their natural habitat and, in some cases, in great numbers. For the Indigenous peoples, who have killed polar bears responsibly for millennia, they are an important element of the Arctic ecology and food web.

However, large-scale hunting by European, Russian, and North American hunters and trappers began in the 1700s, increasing worries about polar bear survival. Although most of the world's 19 populations have recovered to healthy levels, there are still variations. Due to various pressures, some are steady, some appear to be rising, and some appear to be declining.

Polar bears rely on sea ice for survival and are directly affected by climate change, making them a useful indicator species. When all other significant sections of summer ice are gone by 2040, experts anticipate that only a sliver of ice will remain in Northern Greenland and Northeast Canada. This "Last Ice Area" is expected to become increasingly critical for polar bears and other ice-dependent species.

The arctic tundra is a wide, arid, stony landscape characterized by the absence of trees. The name "tundra" is derived from the Finnish word Tunturi, which means "treeless plain." The permafrost is an essential feature of the tundra. The term "permafrost" refers to permanently frozen soil that begins within a meter of the surface.

The soil at the surface thaws in the summer, while the permafrost at deeper levels remains frozen. The depth to which plant roots can extend into the earth is limited by permafrost. It's also the reason why trees don't grow. The ground of the polar tundra is typically rocky, with little nutrients in the soil.

This is because plant breakdown rates are often low. This biome is considered a major carbon sink despite the lack of trees because peat and humus deposits contain huge amounts of organic matter. Peat is sphagnum moss that has decomposed, while humus is organic material.

The biome of the arctic tundra is the furthest north. It encompasses all of the territory north of the Arctic Circle, all the way to the polar ice cap. It stretches as far south as Canada's Hudson Bay region and as far north as Iceland's northern section. It has a surface area of around 3.3 million square miles.

The most crucial aspect of the polar tundra is something that you can't see. Permafrost is a layer of permanently frozen earth that lies 10 to 37 inches beneath. No trees can grow above permafrost because it acts as a barrier to tree roots. It can't even be penetrated by water, which is why, in the summer, when bogs, lakes, and marshes cover the area, the soil above permafrost becomes extremely wet.

Despite the fact that the northern tundra habitats are moist in the summer, they get relatively little rain, with less than 10 inches dropping annually. As a result, they are as arid as many deserts throughout the world.

Tundra grows in two types of climates: cold and dry. Arctic tundra can be found on high-latitude land masses — for example, in Alaska, Iceland, Scandinavia, Greenland, Russia and Canada—or in the extreme south, such as Antarctica. The Alpine tundra is found at extremely high elevations, where temperatures drop below freezing at night.

Tundra habitats are treeless places, mountain peaks, and also the arctic, where the environment is cold, and rainfall is scarce. Summer brings bursts of wildflowers to the tundra areas, which are blanketed in snow for most of the year.

The few plant and animal species that survive in the tundra's severe circumstances are practically clinging to life. They are extremely sensitive to environmental pressures such as decreased snow cover and rising temperatures as a result of global warming.

In summer, the northernmost region of this biome receives nearly 24 hours of sunshine. During periods of the winter, it receives close to 24 hours of darkness. The annual precipitation ranges from 150 to 250 millimeters. Due to the cold temperatures, the majority of the precipitation does not evaporate. In the summer, rivers and lakes frequently generate highly wet soil.

Bogs and ponds can occur when water saturates the upper surface, giving moisture to plants. Although the flora of the arctic tundra lacks extensive root systems, it nonetheless has a diverse range of species that can withstand the cold. In the arctic, there are over 1,700 plant species.

All of the plants have evolved to withstand strong winds and soil disturbances. Plants are short and clump together to withstand low temperatures, and they are shielded from the elements by snow in the winter. They can photosynthesize in low-light conditions and at low temperatures.

Despite its distant location, the tundra is becoming increasingly endangered as humans encroach on it to develop or pump for oil, for example. Climate change, on the other hand, may pose the biggest threat. The warmer temperature is a danger since it can destabilize the frigid tundra habitat and its inhabitants and thaw the underlying permafrost, releasing greenhouse gasses that will hasten global warming.

The Arctic tundra is changing drastically due to global warming, a term that scientists today prefer to refer to a broader spectrum of patterns known as climate change. The consequences in this area are wide-ranging and rather unexpected. As such, polar bears are going to find it difficult to find food and sustain themselves. This will undoubtedly cause their numbers to drop, which may possibly lead to extinction.