What Biome Do Monkeys Live In? 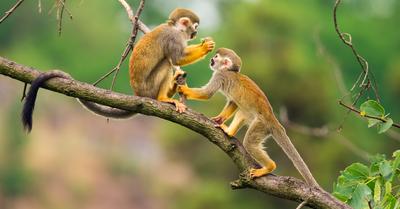 ‍It seems as if we can find monkeys everywhere, from India to Africa. However, what biome do monkeys live in? Do they have a particular biome?

Monkeys play a crucial part in the ecosystem by helping disperse seeds while they travel. As seed dispensers, they play an important role in ecology. Also, they're closely related to humans, which is why it is important to study these magnificent creatures and the biomes they live in.

Monkeys have been around for a very long time, and they have learned how to live in different locations all over the world. Here, we're going to look at tropical rainforests (where monkeys are usually found) and learn about them in detail.

As people who have years of experience in the various biomes that are found in the world and the plants and wildlife found therein, we can help guide you on the unique nature of the dry grassland biome and the tropical biome – and how monkeys thrive in these environments.

The tropical rainforest is a hot, humid ecosystem with year-round rain. It is notable for its extensive plant canopies, which are divided into three levels. Giant trees grow to heights of approximately 250 feet or more in the top layer, known as the canopy. Much of the sunlight is blocked from reaching the ground by this layer of plants. In the canopy, there are also thick, woody vines. They scale canopy trees in search of sunshine. Vines, smaller trees, ferns, and palms make up the intermediate layer or understory. This level has a huge variety of plants that are commonly used as houseplants.

These plants are easily adaptable to household conditions because of the limited amount of sunshine and rainfall. The rainforest's bottom layer, or floor, is covered in damp leaves and leaf litter. This material decomposes quickly in damp, warm circumstances (like a compost pile), returning nutrients to the soil. Due to the absence of sunshine, just a few plants may be seen on the forest floor. The hot, wet environment and all of the dead plant matter create ideal circumstances for bacteria and other microbes to thrive.

Tropical rainforests are found in tropical places when temperatures are consistently high, and rainfall amounts range from 70 to 100 inches. In most portions of the equatorial belt, the environment is usually hot and humid, while seasonal rainfall occurs in places to the north and south. Weather systems in the Northern Hemisphere migrate northward during the summer months of June to August, bringing rain to the northern tropics. Temperatures are distributed fairly evenly throughout the year. Tropical deciduous forests thrive in similar hot temperatures with annual rainfall ranging from 800 to 1,800 mm and a marked dry season.

Tropical rainforests and tropical deciduous woods' equatorial position maintains day length and mean temperature generally consistent throughout the year. At midday, the sun rises to a near-vertical position, guaranteeing a high amount of incoming radiant radiation throughout the year. Although there is no cold season in which plants encounter unfavorable temperatures that prevent them from growing, terrain causes significant small differences in climate, which impact and limit rainforest spread in the tropics.

Tropical rainforests are a treasure trove of biological diversity, as well as sinks for more than half of all atmospheric carbon dioxide absorbed by plants each year. They are communities with extraordinary biodiversity and a wide range of ecological interactions and retain many primitive plant and animal species.

The African tropical rainforest was the home of humanity's forefathers, and it is still home to our closest living cousins, chimps and gorillas. Tropical rainforests provided indigenous peoples with a diverse range of food and other resources, which they mostly used without destroying the vegetation or significantly diminishing its range.

Despite the fact that the environment that supports tropical rainforests is always hot, temperatures seldom approach the extremes seen in drier areas to the north and south of the equatorial belt. This is due in part to significant cloud cover, which reduces the average amount of sunshine hours each day to four to six. The hours of sunshine may be much fewer in hilly places when air masses ascend and chill due to geography.

Rainforest plants work together to offer food and shelter for rainforest animals while also converting carbon dioxide to oxygen. Ground-level competition for light and nourishment has resulted in some unusual plant development. Some plants grow on the branches of other plants and get food from the air via "air roots." Others, like the strangler fig, will wrap themselves around (and eventually strangle) big trees to survive.

A diverse range of creatures may be found across the many strata of a tropical rainforest. When we think of rain forests, we usually think of monkeys. There are a lot of howler monkeys and spider monkeys in Costa Rica. Sloths, tapirs, kinkajous, lemurs, and agoutis are among the other rainforest animals.

The diversity of bird species seen in rainforests is unparalleled. , macaws, quetzals, finches, and Hummingbirds are among the species that live in the forests all year. Others are just here for a short time. Many of the songbirds we see in our yards during the summer spend their winters in rainforests.

The jaguar (Panthera onca) is the biggest cat species living in the Americas and is the third-largest in the world after the lion and the tiger. The jaguar prefers to inhabit the rainforests of the Americas and is found across much of Central America and south to northern Argentina and Paraguay. The range of this species also extends north into Mexico. The jaguar closely resembles the leopard but is sturdier and larger than the latter. The jaguar is a solitary, apex predator of the ecosystem it inhabits.

A diverse range of creatures may be found across the many strata of a tropical rainforest. When we think of rain forests, we usually think of monkeys. Tapirs, jaguars, ocelots, agoutis, and kinkajous are among the other rainforest animals.

Reptiles and amphibians thrive in a warm, damp climate. Frogs, salamanders, snakes, and lizards of various species may be found in practically every stratum of the forest. Butterflies and moths can also be found in abundance in the tropics. Many people move, spending their winters in the rainforest and their summers in our backyards.

From Brazil to Mexico, spider monkeys may be found in the Central and South American jungles as well. All seven of these monkey species are endangered in some way. These gregarious critters dwell in big groups of around 35 individuals who break up to feed throughout the day. The monkeys that live in the Amazon Rainforest are known as "rainforest monkeys."

Monkeys, such as marmosets, tamarins, squirrel monkeys, and spider monkeys, are examples of rainforest monkeys. These monkeys, as well as all other monkeys endemic to South America, are known as New World monkeys. This phrase alludes to the notion that a split in the Simiiformes infraorder occurred 40 million years ago, resulting in the creation of the modern South and Central American monkeys, while the second part (African apes) became known as the Old World monkeys.

The Amazon is also home to a wide variety of monkey species. When it comes to biodiversity, the Amazon Rainforest is unrivaled. The Amazon is home to over 430 mammal species, with more still to be discovered, in addition to millions of insect species, over 1,000 bird species, and hundreds of amphibian and reptile species.

Monkeys have long been a big draw for travelers visiting the Amazon, whether it's in Brazil, Peru, Ecuador, or one of the other South American countries. New World monkeys vary from their Old World counterparts in several ways, the most noticeable of which being their flatter noses with nostrils that face sideways. The spider monkey, for example, has a prehensile tail, which is a helpful adaptation not found in Old World monkeys.