What Biome Do Hippos Live In? 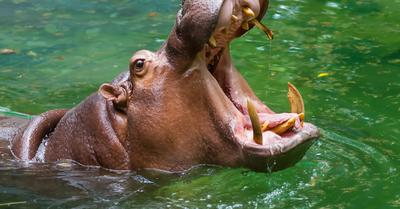 The hippo is one of the largest animals on the planet and can only be found on the African continent, but what biome do they live in?

Hippos live in the tropical savanna biome, which can be found primarily in East African nations. The most notable tropical savanna region is in the Serengeti, which is in Tanzania near the Kenya border. This biome is known for its golden tall grasses and diverse range of animal species.

Most of us usually only get a chance to see hippos at zoos or at animal sanctuaries, but this is not their actual home by any means. The tropical savanna in Africa is the only place on Earth that hippos can be seen in the wild, which is why tourists flock from all over the world to catch a glimpse of these incredible animals. The characteristics of the tropical savanna make for a perfect habitat for hippos to call home - given that these massive creatures are so dependant on water for their survival. However, this biome was once much more apparent around other parts of Africa, but it has been on the decline in recent years due to habitat loss. To help you understand everything you need to know about the biome that hippos live in, we are going to take a closer look at the tropical savanna in detail.

After years of working as a conservationist in the tropical savanna biome, I have had a significant amount of in-depth experience studying the hippos that inhabit this natural area. My research has led me to conclude that hippos live in the tropical savanna due to their dependence on the fresh bodies of water that can be found in this region.

The tropical savanna biome is one of the most gorgeous places on the planet. It is filled with thousands of different plant and animal species that depend on the ecological stability of this region in order to survive. The hippopotamus has made itself right at home in the tropical savanna, which is why this part of Africa is the only place that we are able to witness this animal in the wild.

With that being said, if you ever get a chance to see one of these massive creatures in person, you would be wise to keep your distance. The reason for this is that hippos are the most dangerous land mammal on the planet, which generally comes as a surprise to most people given that hippos tend to have less of a danger stereotype compared to lions - who also live in the tropical savanna biome. Hippos are known for being very aggressive and can be quite territorial, so try not to cross paths with one of these giant animals in the tropical savanna.

This biome is known for its tall yellow grasses and shrubs, which have been depicted in famous movies such as The Lion King and shown in countless nature documentaries over the years. While the tropical savanna is characterized as being very dry, it does have patches of water scattered throughout it that are essential for the habitat of the hippo. A hippo will spend as much as 16 hours per day in the water - where it will bask in the various rivers, lakes, and swamps that can be found in the tropical savanna biome.

They spend this much time in the water because they need to find a way to escape the extreme heat that the tropical savanna is known for. This makes water a very important resource for the hippo - not only for drinking but for maintaining a stable body temperature, which can prove to be challenging during periods of extreme drought. Let’s dive right into the qualities and characteristics of the tropical savanna biome.

The hippo greatly depends on the stability of the wet season for its survival - given that it needs water in order to stay cool. This makes life for the hippo quite unpredictable, as each year there can be a fluctuation in how long a season will last and how much rainfall there is. There have been many instances with the tropical savanna biome receiving less rain in certain years, which means that water areas become increasingly smaller - with some even drying up completely. When this occurs, hippos are often forced to flee their homes to find a new habitat that has enough water to support their survival needs.

Water within the tropical savanna can be such a precious resource given that there can be as little as just a few inches of rain over the course of a 5 to 7 month period during the dry season, which generally ends in May. Once the dry season is over, the environment completely changes and becomes somewhat of a wetland that can receive as much as 40 to 60 inches of rain in just a single wet season. This is a glorious time for the hippopotamus and so much life within the tropical savanna region, as streams, rivers, and swamps are replenished and are able to support lots of different species.

During the wet summer months of the tropical savanna, the temperature will range from 80 to 86 degrees Fahrenheit. Whereas the dry winter months will usually be a bit cooler at roughly 67 to 78 degrees Fahrenheit. While these temperature conditions are not nearly as intense as a desert, they are still extremely difficult to cope with given the contrast of the two seasons. This contrast exists given that the tropical savanna biome serves as a barrier between desert regions and the tropics, which gives it characteristics that embody both of its neighboring biomes.

The tropical savanna biome has been known to have its climate permanently change, which sabotages the livelihoods of hippos of the area. If a region receives significantly less rainfall than needed for the area to thrive - or if it has an overly prolonged dry season - then vegetation could potentially die permanently, which results in the tropical savanna turning into a dessert.

The tropical savanna has various land characteristics, but as mentioned above, there is nothing more important within this habitat than its water content. Throughout the biome, you will be able to find patches of lakes, streams, rivers, and swamps, which is where you can expect to see the majority of the hippos of the region spending their time.

If you scan a lot of these bodies of water, you will likely see dozens of hippos floating around and cooling off. They can be spotted by their large bodies, but often they will only have their eyes, nostrils, and ears above the surface of the water with the majority of their mass submerged. They do this to maximize the amount of coolness that they receive.

Within this habitat, you can expect to see at least 10 hippos in the water at a time. The reason for this is that hippos are social animals and will always stick within their group. You can usually expect to see hippo groups that have 20 to 30 members, but there have been sightings of hippo colonies that can be as large as 80 to 100 per group!

In their habitat, hippos are able to find the various types of food that they eat. The hippo is primarily an herbivore and mainly relies on the basic plants of the tropical savanna for its survival. These are generally plants that can be found within the fresh bodies of water that they inhabit, which are various types of grasses. However, they are certainly able to get their fill with this diet as they are known to eat over 75 lbs in just a single night.

If a hippo is venturing out of the water for their food, they will also find other types of plants and fruits on land. This can also be a fallback option for the animal if the amount of grass in the water is not enough to sustain their diet. Let’s take a closer look at some of the plant species that exist in the tropical savanna:

With that being said, there have been reports of hippos eating meat occasionally. In times of desperation or confusion, hippos may resort to eating some animals for their survival. This is a rare occurrence but if a hippo is struggling to survive from the vegetation that is available, it may kill and eat an animal. However, hippos are considered to be herbivores the majority of the time and actually do not have metabolisms that are designed for supporting a carnivorous diet. In fact, their metabolism has evolved in a way that they can store food for as much as 3 weeks during a long period of hunger.