What Biome Do Beavers Live In? 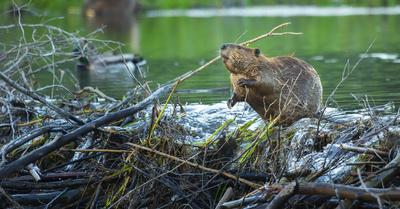 Beavers are America’s quirkiest rodents and they play a vital role for the entire ecosystem that they inhabit, but what biome do they live in?

Beavers live in freshwater biomes that have lakes, rivers, streams, and ponds. The freshwater biome that beavers inhabit can be found primarily in the northern hemisphere in places such as the United States, Canada, Russia, and a few locations in Northern Europe.

The beaver is a fascinating animal and is as cute as it is quirky. This adorable creature is considered to be a key species, which makes it absolutely essential for ensuring the stability of its biome. Animals that are considered to be keystone species generally signify the health of an entire ecosystem, which is why beaver populations are closely monitored by conservationists. The reason for this is that beavers are the ecosystem engineers of their biome and actually have the capability of not only influencing their own ecosystem but creating a new one altogether. To help you understand everything you need to know about the biome that beavers live in, we are going to break down the qualities and characteristics of its habitat and the role that it plays within it.

After years of working as a conservationist that studies freshwater, aquatic biomes, I have had an extensive amount of experience researching beavers and their habitat. Through my studies, I learned that beavers are an incredibly important species for their biome and are one of the most influential species on the entire planet.

If you have ever seen a giant wooden dam in the middle of a freshwater channel, you have likely witnessed the handiwork of the beaver. These critters are top-of-the-line lumberjacks and are expert engineers, as they are able to chop down entire trees all on their own! This is a pretty incredible accomplishment for an animal that is slightly larger than the size of your average house cat. This tendency to be nature’s lumberjack has left many people puzzled for decades, but it actually has a lot of benefits for the freshwater biome.

These adorable rodents create their habitat by strolling through forested areas near freshwater channels - where they cut down trees to build themselves homes. The beaver is able to take down entire full-grown trees in a matter of minutes - with people having sighted the critter chopping down trees as large as 10 ft high in less than 10 minutes. These crafty animals then break down these trees into smaller logs, which they then roll into their desired dam location to start building their home.

Watching these engineers at work is quite fascinating, as they are able to create large dam structures relatively quickly - all on their own. This then provides shelter for the beaver so that it can protect itself from predators and harsh climates. However, the beaver’s work is not finished when it is finished with the dam. This sort of structure is very beneficial to the health of the entire freshwater biome and many of the other species that depend on it. In addition, the wood that the beaver utilizes not only provides it shelter but sustenance as well, as the beaver actually eats wood for its food.

With that being said, one of the greatest accomplishments of the beaver is not only how it influences its own biome, but how its actions are able to create an entirely new one. The dams that beavers create often affect the flow of water within the freshwater channel. When the right conditions and circumstances are met, we often see river water begin to spill out of the freshwater channel and flow into land areas that usually would not receive so much water. This results in an environmental phenomenon where the beaver is able to single-handedly create a wetland. Let’s take a closer look at the qualities and characteristics of the freshwater biome.

The climate of the freshwater biome can vary depending on where it is located. The reason for this is that the freshwater biome can be found on just about every continent on the planet, but the beaver only inhabits this biome in a handful of geographical locations, which are primarily in the northern hemisphere in places such as the United States, Canada, Russia, and Northern Europe.

The beaver copes with these cold conditions by having a nice thick coat to protect it from harsh winters, but the ultimate defense that the beaver has is its dam, which serves as its home and shelter throughout the year. This dam gives the beaver additional protection against the adverse climate of the freshwater biome, which is why it spends a good chunk of its time preparing its shelter during the warmer and more stable months of the year.

The freshwater biome in the northern hemisphere has got plenty of beavers, but also plenty of other species that rely on this habitat for survival. The rivers, lakes, streams, and ponds that make up the freshwater biome are essential for the survival of both aquatic and land species.

The beaver plays a vital role in this scheme, as it is able to greatly influence the conditions of the entire biome, which is why they are considered to be ecosystem engineers. The dams that the beaver creates change the structure of the biome by influencing the flow of water, which alters habitats in so many ways. This results in changes in water levels for the entire freshwater channel and it can help benefit the biome by filtering a lot of what flows downstream. This has been known to have a purification effect on the water that increases its quality.

The fact that the quality of the water is increased as a result of the beaver’s dam means that countless species are able to benefit from the rodent’s handiwork. Let’s take a look at some of the species that live within the freshwater biome:

All of these animals are influenced by the actions of the beaver within the freshwater biome, which ensures the balance and stability of the entire ecosystem. However, beavers need to tread lightly when engineering these beneficial dams, as they are often being hunted by some of the predators that inhabit the biome such as bears, coyotes, and bobcats.

With that being said, when beavers create these dams they are often able to influence the freshwater biome in more ways than one. As mentioned above, the water level of the freshwater channel is influenced by the beaver’s dam, which often results in water flowing out and creating large pools of water on land. This in turn creates an entirely new ecosystem within the freshwater biome known as a wetland.

Wetlands are an incredibly vital habitat for so many plant and animal species that are entirely dependent on the beaver’s lumberjack activities for their own survival. The beaver’s seasonal dam activities ensure the creation of wetlands that would not be possible otherwise. Many wetlands around the world have been under increasing threat, which is why it is vital that we maintain healthy beaver populations within freshwater biomes. Here are some examples of plants and animals that live in wetlands:

While the effects of the beaver’s activities are very beneficial within the freshwater biome, they have been known to be destructive in some situations. The dams that beavers create can sometimes have adverse effects on some species that live specifically within freshwater channels. Given that the freshwater channel is essentially blocked off by the beaver’s logs and branches, this can make it harder for aquatic species such as fish to pass through undisturbed. This can result in fish becoming dispersed from their groups, which can be very damaging for the migration of their species.

In addition, beavers have also been known to cut down their trees without any real concern for environmental sustainability. While the majority of the time the trees that they cut do not cause any serious ecological harm, they can sometimes cut down trees that are endangered or at risk, which ultimately can be problematic for the ecosystem as a whole. The key thing with avoiding the damaging effects of beavers is to monitor their populations so that they are not too great in numbers. This helps mitigate the negative effects that they could have on their biome - while at the same time ensuring that their positive influence continues to provide beneficial attributes to the freshwater biome.