What African Biome Contains The Most Variety Of Land Mammals? 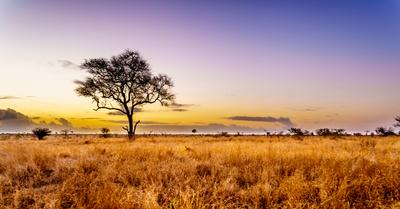 ‍When we think of Africa, we imagine a landscape with different animals. But what African biome contains the most variety of land mammals?

Few people know this, but the African Savanna is rich in biodiversity and is home to many of the world's most exotic birds and land mammals, so it is important to protect this natural ecosystem.

Covering around 46% of the area, the Savanna Biome is the largest biome in southern Africa and is rich in vegetation and land mammals. It is home to a variety of prey animals like gazelles and bison and predators like lions and cheetahs.

The combination of topography and climate gives rise to a broad vegetation zone in Africa that attracts various species of animals, which is why it is so important to preserve these natural ecosystems that are home to countless species, including a large number of land mammals.

We've studied multiple biomes on this planet, and as the experts, we will dig deeper into the climate, location, and the several different species of land mammals that are found in the African Savanna.

Africa has the world's biggest savanna. The savanna grasslands span over half of Africa's continent. Australia, South America, and India all have large savannas. The wildlife found in the African Savanna is one of nature's most stunning spectacles. The African Savanna is a well-developed chunk of vegetation in South Africa's Lowveld and Kalahari regions and Zimbabwe, Namibia and Botswana.

Climbing a tree in the middle of a savanna reveals miles of flat area covered with tall and short grasses, dotted with low-lying plants and scattered trees. Savannas are typically found at the intersection of a forest and grassland. This implies that while towering trees remain, like in a forest, they are spread out and surrounded by grassland.

Savannas are prevalent in tropical regions and are distinguished by the seasons, unlike grasslands, which are fairly similar. They do not have the summer and winter seasons that we are accustomed to in the United States. Seasons on the savanna are characterized by the amount of rain that falls. As a result, instead of four seasons, they only have two: wet and dry.

You'll want to wear shorts and a T-shirt no matter when you visit the savanna since the temperature seldom drops below 60° F (15°C), even during the northern hemisphere's "winter" season. It may reach temperatures of 80 to 100 degrees Fahrenheit (27 to 37 degrees Celsius) throughout the majority of the year — hardly the type of winter weather that most of us are used to.

This is the driest time of the year. During the dry season, savannas receive very little rain – approximately 4 inches (100 mm) – and they may go months without receiving any rain at all. Plants go without water for a long period, which is why there aren't many trees.

On the other hand, the rainy season sees a lot of rain. The "monsoon season" is named for the rain that falls so quickly and hard at times. A savanna might get anything from 20 to 50 inches (500 to 1200 mm) of rain throughout this six-month period. The grasses can grow thick and lush as a result, producing a home for a variety of animals and birds.

Savannas also support a diverse range of predatory animals and birds. Both feline (such as lions and cheetahs) and canine (such as African wild dogs) creatures have coloration that permits them to blend in with the grasslands. Vultures, eagles, and goshawks, for example, have amazing eyesight and can identify even a well-camouflaged grassland species from a great height.

Savannas are home to a large number of rodents. Mice and rats belong to the rodent family of mammals. Rodents are frequently seen in holes leading to elaborate subterranean burrows. Rodents have adapted to hide from larger predators and stay cool in these burrows.

Plant-eating animals have evolved strategies to evade predators. Some species, such as gazelles and ostriches, rely on speed to avoid predators. The giraffe's height allows it to notice predators from afar, while the elephant's bulk and strength keep predators at bay.

Some animals have robust cheek teeth to withstand their diets; however, many species, such as those found in the African Savanna, cannot consume tough grasses. Cheetahs have acquired speed for hunting, but giraffes have built long legs that make them too high for a cheetah or other predator to reach. Naked mole-rats eat big subterranean tubers generated by plants, the secretary bird eats snakes and has evolved long legs to travel through the grasses, and ostriches can gallop at speeds of up to 31 mph to avoid predators. They can also have extremely thick skin to prevent predators from biting through it.

The lion is the savanna's powerhouse, weighing up to 420 pounds and reaching lengths of up to 10 feet. A lion is a formidable predator. Imagine a formidable beast with the appearance of a domestic cat. However, it is larger, quicker, and more powerful. Lions have a soiled brown coat and a rounded skull. Males have manes, which females do not. Manes are a ruff of long hair that is brown in the front and black in the rear that surrounds the neck.

Lion prides are the only large cats that live in groups. Each pride is like a little town of 4 to 40 people. They all pitch in to help hunt in order to keep everyone healthy and nourished. One dominant male and sometimes a few more males and connected females and their pups make up the pride. The males guard the pride while the females hunt and look after the pups.

Elephants found in the African savanna are the world's largest elephant species and the largest terrestrial mammal. Their enormous ears and front legs that are substantially longer than the hind legs differentiate them. African savanna elephants may be found in 23 nations and inhabit a wide range of environments, including open and forested savannas. Botswana, South Africa, Zimbabwe, Zambia, Namibia, Kenya, and Tanzania have the greatest populations in Southern and Eastern Africa.

African savanna elephants are widely researched, and numbers are easily approximated due to their visibility in the open regions where they reside. The bulls only mingle with these herds during mating season, and each family unit normally comprises roughly ten females and their calves. Several family groups frequently band together to create a "clan," which can number in the hundreds and is commanded by a female matriarch.

Savanna elephants graze on grasses as a result of their environment, but they also eat a broad range of plants and fruits. The elephant's food preferences change depending on the season; during rainfall, elephants eat more grass than during the dry season.

Over a million black and white rhinoceros roamed Africa's savannas just 150 years ago. Rhino populations and distribution quickly declined as a result of constant killing by European settlers. During the 1980s, poaching increased as demand for rhino horn, a treasured element in traditional Asian medicines, putting both species at risk.

Some African rhino populations are currently stable or expanding as a result of aggressive conservation and anti-poaching initiatives, as well as a worldwide prohibition on the trade in rhino horn. They're significant grazers, eating a lot of vegetation and helping to change the African terrain. This aids other creatures and maintains a healthy environmental balance.

Also, the locals rely on the rhino habitat's natural resources for food, fuel, and money. Rhinos are one of Africa's 'big five,' and they are a famous tourist attraction. For locals, ecotourism may be a significant source of revenue.

The giraffe's size can also be a disadvantage—drinking at a water source is difficult and risky for a giraffe. They must spread their legs and stoop down in an unusual position in order to do so, making them susceptible to predators such as Africa's large cats. Giraffes only need to drink once every few days since they acquire the majority of their water from the lush vegetation they consume.

Zebras dwell in "harems," which are tiny family units. One stallion, numerous mares, and their offspring make up these groupings. Harems are extremely stable family units since they stay together for months or even years.

The savannas have a lot of fires and seasonal droughts since it doesn't constantly rain. As a result, plants and animals need to adapt to protracted periods of drought. Animals can accomplish this by migrating, but plants must develop additional adaptations, like water storage organs and strong roots, to withstand long periods without water and the threat of fire.

The plants and animals that dwell in the savannas must learn to coexist with people. While tourism has aided in the preservation of savannas, people have also wreaked havoc. Scientists are concerned that as the climate warms, savannas may receive even less rain and more heat, limiting the number of animals and plant life that can survive.