Are Latex Gloves Biodegradable? (And Recyclable) 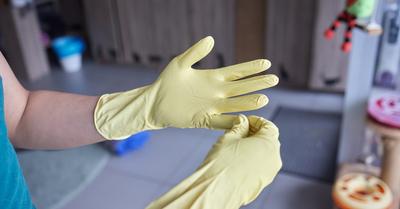 Latex gloves are commonly used around the world for protection from dirt, germs, chemicals and whatnot. But are latex gloves biodegradable? And recyclable, for that matter?

In some fields, there is no choice for workers but to wear gloves, because not wearing them could have severe negative effects. But the question about their environmental impact remains.

Latex gloves are mostly biodegradable. Since they are made from the sap of rubber trees, they remain largely natural and will eventually break down, for the most part. However, these are not recyclable, because of the risk of germs and infections.

The environmental impact latex gloves have will depend on both, recyclability and biodegradability, but at the end of the day, whether or not they break down into natural components is what matters the most. After all, you can only recycle an item so many times.

We looked into the process of making latex gloves and what materials were used to do so. This helped us understand whether or not latex gloves are biodegradable and whether their environmental impact can be reduced.

Biodegradability means whether or not an item will break down into its simplest components. Complex compounds and substances will need to be broken down into simpler ones before these elements and compounds can be returned to the earth for use by future generations.

When it comes to latex gloves, many people make the mistake of assuming they are non-biodegradable, because they look and feel similar to plastic gloves. However, latex materials are largely natural. That is, a very large part of their composition comes from natural sources, with a small portion being man made.

This means that you can dispose of used latex gloves in a compost bin without worrying about the negative impact they have on the environment. To make latex gloves break down faster, you can also choose to cut them into pieces or shred them.

This helps increase the surface area that comes in contact with microorganisms, and thus helps them decompose faster.

However, it is important to remember that latex gloves are often used to keep dangerous substances like chemicals or germs away from our skin, lest we get infected or harmed. That means gloves that have come in contact with such substances should never be put into the compost without disinfecting.

This is because people in charge of handling compost bins can get infected, as well as because these substances can also spread to other items within the compost bins.

Sometimes, especially in cases where these gloves have been used in the medical field, there may be the risk of biohazards if these gloves are not disposed of correctly. Disinfecting, or at least washing with water, is highly recommended.

How Long Do Latex Gloves Take To Decompose?

When we say ‘biodegradable’ to refer to breaking down of substances into simpler components, we usually mean it in the sense that this will occur in the near future. In a sense, everything is biodegradable, but some substances can take hundreds to thousands of years to break down – these are what we would refer to as non-biodegradable substances.

So, knowing that latex gloves are biodegradable in the near future, how long do they actually take to decompose?

Some items, like food, can decompose overnight. Others, like paper, can take some weeks. Latex gloves have a bit more complicated composition than these, and will take about five years to decompose, given that they are in the right conditions.

Since biodegradation depends on the help of microorganisms for breaking down, the gloves should be in conditions where these microorganisms can thrive and carry out the decomposition process.

As mentioned earlier, the use of latex gloves is usually to keep ourselves safe from harmful substances. This means that the gloves become contaminated once they are used. Even if you wash and disinfect them, there is always the risk of spreading dangerous substances to other people if they are recycled. That is why latex gloves are most often not recycled, but will end up being composted instead.

Are Latex Gloves Bad For The Environment?

If you were to ask an average person if latex gloves were bad for the environment, they’d probably say yes. And truthfully, they aren’t wrong.

But latex gloves are biodegradable, right? Then why are they bad?

Not all biodegradable items are necessarily good for the environment. Biodegradability only refers to some aspect of eco-friendliness, in that the materials used to make an item will eventually return to nature in a simple form.

However, this process takes time, and will need certain conditions to be fulfilled before it can be carried out fully. You can’t place your latex gloves in the compost and expect them to be gone overnight.

In the event that it rains, these landfills can end up getting flooded, and the gloves can get washed into oceans or other such places. Animals and fish may end up eating them and get harmed – latex can be toxic to some plants and can even harm the soil!

Even if they don’t get flooded, these landfills will not always satisfy the conditions latex gloves need to break down, so it may take much longer for them to decompose than it would have otherwise.

On top of that, latex gloves come from rubber trees, and rubber trees may not always be sustainable to plant. If too many of them are planted for the sake of latex, they can ruin the balance in the ecosystem and thus, harm the environment.

Additionally, latex gloves aren’t 100% rubber either. While a pretty large chunk of them is made from rubber, they also include other materials and chemicals mixed in, which may not be biodegradable and may even be toxic. Thus, this makes them bad for the environment. These chemicals can be dangerous for land or marine animals, and can also affect the soil’s fertility. This, in turn, could endanger plants.

Another major thing to consider is that latex will have to go through an entire complicated process in factories before they eventually become gloves. This process can include a lot of toxic pollutants being released into the air, and waste material being dumped into water or land.

While this does not make latex gloves themselves harmful, it does ultimately become a contributor towards pollution.

At the end of the day, while latex gloves do provide some significant advantages in many industries, it is clear that they also have some downsides to consider in terms of the environment.

While they are not as bad as some other items out there, it would help if their use was reduced as much as possible without compromising on safety. If we go overboard with something – even if it's biodegradable – it could end up posing some real risks to the environment.