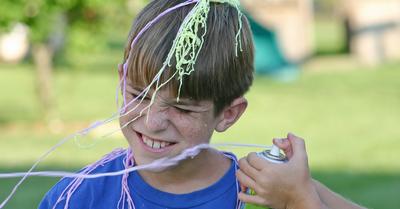 Silly string is a whole lot of fun and it is a favorite at birthday parties and celebrations, but many people are wondering - is it biodegradable?

No childhood is complete without silly string, as this is product is guaranteed to bring a smile to your kid's face. However, many environmentalists are pushing for this product to be removed from stores due to ecological concerns.

In the past, silly string has always been a set standard at kids' parties - and even for some adults. This party product looks a lot like a can of spray paint but shoots out fun and colorful string instead. Over the years, we have seen less and less silly string being sold in stores. Part of this is due to how challenging it is to clean up and get out of the house but another reason why silly string is becoming less popular is due to its environmental impact. Silly string has been under fire by ecologists in recent years, as we are beginning to discover that it is not biodegradable and ultimately quite wasteful for a few minutes of fun. Keep reading to learn more about the environmental impact of silly string and why it is not biodegradable.

After extensively researching silly string, I have been able to gather enough information to determine whether or not this product is biodegradable. My research has taught me that silly string is not biodegradable due to the components found in its mixture.

Silly string first came on the scene back in the early 70s when it became an instant hit and remained popular for decades. When silly string first gained its mass appeal, people immediately used it in bulk at parties and paid little to no attention to how this product might affect the environment.

This is understandable because environmental values at that time were not what they are today. Sustainable living has only become a theme in our culture and society in recent years, which is why we are only now starting to pay attention to the underlying problems that our consumerism is having on our environment.

Since environmental values and conscientious consumerism are becoming much more prevalent these days, silly string has been put under a microscope and we are finding out that it contains components that make it non-biodegradable and harmful to the environment.

This has led to a lot of people boycotting silly string to prevent unnecessary ecological harm from being caused to our planet. So much so, that some cities and states have actually banned silly string altogether to not add on to the problems that it causes. To help you understand this further we are going to closer look at why silly string is not biodegradable.

When you push on the nozzle of a silly string can, the compound within it infuses silicone with plasticizer and resin to create the substance that makes it so much fun. However, this compound is also what makes silly string nonbiodegradable.

Silicone in particular is the most non-biodegradable component of silly string, as it will take a very long time to break down. Technically, it is not as harmful to the environment as plastic but it is still a threat to the environment.

The silicone compound in silly string also becomes problematic because it has a habit of getting into our sewage system. Consumers who do not properly dispose of silly string (by putting it in the trash), often end up getting rid of it through other means such as flushing it down the toilet.

When silly string enters our sewage system it does not break down or biodegrade the way other waste materials do. It has a habit of clogging up sewage ways and it leads to a mess of environmental issues when it does.

We also need to consider how the silicone affects the environment due to the plasticizer and resin compound that is attached to it when it shoots out of the can. This compound is a threat to the environment as it contains toxins that are not ecologically sound.

This is however still a better alternative to what was used in the past. When silly string was first launched back in the 70s, we were using CFCs (Chlorofluorocarbons) within the mixture. We were using CFCs in a lot of products in those days and we later discovered that these are particularly bad for the environment. We found out that CFCs were destroying our ozone layer at a rampant pace and our silly string was contributing to the problem.

We eventually banned the use of this harmful compound in silly string and have replaced it with aerosol, which lowers its ecological footprint. But this does not make silly string any more biodegradable.

The steel that is used for the can will take anywhere from 100 to 1,000 years to biodegrade, which only adds to the environmental harm that silly string causes. In addition, we also need to consider the other components of the can, as it is not only made out of steel.

The materials of the can in addition to the contents of the mixture are what make many people question whether silly string should be banned entirely.

If you love silly string but do not want to contribute to the negative impact that it has on the environment, you may want to consider using some alternatives that can be just as fun.

There are a number of different products out there that are perfect for parties and celebrations, which are biodegradable and cause significantly less ecological damage - or none at all. Here are some silly string alternatives for you to consider.

When it comes to parties, confetti is a crowd favorite and many people actually prefer it to silly string. This is a product that is just as fun and can be significantly better for the environment.

There are a ton of great biodegradable confetti options out there that will decompose very quickly. However, you want to ensure that you are buying the right kind, as not all confetti is actually biodegradable.

These are fantastic alternatives to silly string and regular confetti, as they will have virtually zero negative impact on the environment and will be completely biodegradable. With that being said, it may be just as much of a pain to clean up!

Who doesn’t like bubbles? When it comes to party favorites, bubbles are the next best thing to confetti. They are super cheap, accessible, and will cause way less damage to the environment than silly string. Not to mention they do not require any cleaning up like silly string or confetti.

Biodegradability does not even need to come into question with bubbles, as they do not leave any noticeable trace behind that involves waste. This is a great party resource to utilize as you will not contribute to any kind of trash at all in the process.

With that being said, some bubble brands do not always use the most eco-friendly ingredients, which can cause a different kind of environmental harm. If you want to celebrate with a sense of sustainability, you should try out eco-bubbles.

A lot of people prefer to use silly string as a type of decoration around the house for parties, which is understandable given that it is so easy to flare up the atmosphere of a celebration.

Instead of using silly string for your party decorations, try to use something that is more sustainable like paper decorations. They can be just as lively and are much less of a headache to clean up.

Paper is completely biodegradable and you can even buy quality decorations that you can reuse for future parties and events.