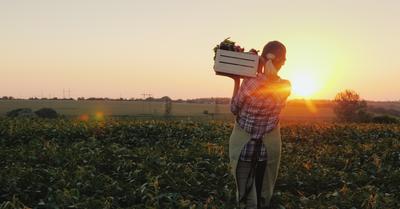 The depletion of natural resources is a major issue being felt in our nation, which is why farmers are aiming to protect their local environment.

The way farmers can help protect land resources is to practice responsible, ecologically beneficial farming techniques, optimize current farming strategies, and choose crops that are in alignment with their local environment.

Implementing these farming practices has proven to greatly mitigate the number of resources needed to grow food and has directly benefited the local surrounding environment, which prevents habitat loss, soil infertility, and water pollution. By adapting our modernized, industrial-scale farming practices to new-age thinking and revamped traditional strategies, we can be a proponent in the protection of our planet against climate change and ensure that our food sources stay plentiful for the future.

These farming practices have been established as standard approaches towards responsible farming by the United States Department of Agriculture to protect the fertility of our soil and are encouraged by the Environmental Protection Agency to prevent further unnecessary harm from being done to our environment.

Throughout the 20th century, our nation began adopting large-scale industrial farming practices that amounted to an abundance of food and economic prosperity. These modernized practices appeared to be a breakthrough in farming and seemed to be hugely beneficial for ensuring that food shortages and hunger be a thing of the past.

Unfortunately, we began to see a pattern of soil infertility and water pollution being associated with these practices after decades of implementation, which resulted in adverse and catastrophic effects being cast on our environment.

What’s become quite clear to all of humanity is that disrespecting our environment does not come without backlash. Given that we are completely dependent on our soil as one of the most vital and accessible resources for food production, abusing it without careful consideration is something we simply can’t afford to do.

To combat the adverse effects of irresponsible farming practices in the past and attempt to reverse the damage that’s been done, so that future generations can continue to grow food, certain responsible farming techniques are being utilized by farmers to protect our land resources.

Let’s dive into some responsible techniques farmers use on their crops.

This traditional farming technique was disregarded by many Big Agro farms throughout the last century due to its perceived inefficiency. As we began seeing large-scale soil degradation occur, farmers began to question whether a short-term solution for mass production was worth sabotaging their land resources for millennia.

When farms rely on a single crop for continuous harvests, they exhaust the soil and deplete the nutrients that are necessary for quality and effective food growing. This is due to each crop being more dependent on specific nutrients in the ground for it to properly grow, which results in a single set of nutrients in the soil being used up at a rampant pace.

The real tragedy of practicing this irresponsible farming technique is that once the damage is done, it is practically irreversible - at least within our lifetime. Crop rotation is an incredible way to avoid this environmental catastrophe.

By simply changing what crops are being planted on a seasonal basis, farmers protect the nutrients in their soil. This rotation of crops facilitates the variety of nutrients being used in the soil and prevents land degradation.

Implementing this practice, which has been utilized for practically as long as we have been growing food is one of the most vital techniques farmers have to protect their land resources.

Much like crop rotation, mulching is a technique that keeps healthy nutrients abundant in the soil.

As the soil begins to warm up after a winter season, organic material is often placed within the dirt and on top of it. This organic material works as a protective agent for the fertility of the soil.

By keeping mulch in the dirt, the soil stays busy and healthy by continuing to break down organic, nutrient-dense materials for the next harvest cycle.

We can see the following type of mulch being utilized by farmers:

Moreover, the use of mulch to cover soil also has its benefits. The cover mulch acts as a protective layer against cold temperatures and also is a great barrier between the soil and high winds, which have had detrimental effects on the health of our topsoil in the past.

Farmers are often able to get this resource at a very reasonable price as these materials are often discarded and thrown away by other industries - resulting in a win-win for both parties.

When we take an aerial view of many farmer’s properties, we will commonly see certain barriers that subdivide the various crop areas located around the farm. These barriers will typically contain a form of irrigation and a barrier on each side of it from the crops.

Buffer strips help protect the surrounding crops from soil erosion by acting as a stabilizer. This keeps the quality of the soil intact and prevents potential land degradation.

In addition, the buffer strips work as a form of filtration from the activity of the farm and the water channel within the strip.

The runoff we often get from farms is highly toxic and is damaging to both the quality of the soil, as well as the surrounding environment. The buffer strips in place help filter out the pesticides used on crops and mitigate the amount of sediment and fertilizer that enters the irrigation.

What irresponsible farming has ironically taught us is that much of how we’ve been farming for thousands of years is still to this day one of the most effective and environmentally friendly ways to grow our food and protect our land resources.

The use and abuse of our land caused by a complete dependency on dangerous pesticides, has kept us trapped in a vicious cycle of using toxins in our farming practices.

We’ve seen that invasive crop-eating organisms adapt to their environment. When pesticides became extremely popularized, it left us with the impression that one of the biggest challenges of farming had dissipated.

This harmful practice has led to land degradation and has caused adverse effects on our environment.

With the rise and popularization of organic farming gaining mainstream momentum, this practice is becoming less and less common as the years go on. Hopefully, farmers and the population at large continue to see the value in this food-growing method, which will greatly contribute to protecting our land resources.

The combination of various farming techniques has proven to be the most detrimental measure we can take to protect land resources. However, by further adapting these farming practices in correlation with some optimized strategies, the protection of our land resources can be solidified even further.

Much of what contributes to the depletion of land resources simply comes from an unstrategic approach and consideration towards optimizing the farm itself.

By adopting a farm to its local climate and environment, as well as utilizing efficient equipment for food growing, farms can greatly be optimized for land resource protection.

With a country as vast and fertile as the United States, we have plenty of room to play around with when it comes to growing our food. A major contributor to the depletion of land resources has been growing certain crops in certain areas, as well simply making the choice to grow them at all.

This concept is most commonly seen with food that requires the most amount of water to be grown. Here’s a list of daily foods that demand a lot of water:

Stats like these really put into perspective just how much water is needed to grow such a small amount of food. This is greatly exacerbated with certain foods over others.

A common trend among food production is that animal products (especially red meat) tend to demand a considerably larger quantity of water. The most practical approach to resolve this is to simply limit the amount of animal products we consume and increase the amount of plant-based foods we eat.

In addition, analyzing a water-demanding crop like almonds that are mainly grown in California, which is a state that has experienced mass droughts and water shortages, could be avoided by limiting the crop quantity or changing the location of the crop.

Much of our farming equipment is the product of the advancements of 20th-century farming. As we have discussed before, this was an age of farming innovation and technological advancement within the industry.

With that being said, certain types of equipment have become outdated or simply need to be optimized for the protection of land resources.

Farmers have optimized some of their equipment by implementing the following:

There is plenty farmers can do to protect their lands. Revisioning some strategies to optimize their food growing process will amount to be a major contributor to this fight.