Are Orbeez Biodegradable? (& How To Dispose) 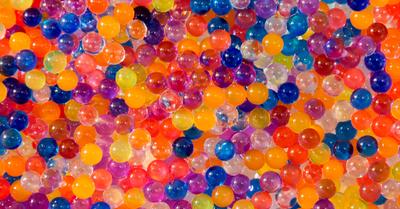 Orbeez are an amazing product that can be utilized in a number of different ways to absorb water and moisture, but are they biodegradable?

Orbeez are not biodegradable within a sustainable timeframe, as they will take roughly 7 to 10 years to fully biodegrade - depending on the conditions they are kept in. They should be disposed of the same way you dispose of any other waste - in the trash.

These days, we seem to be seeing Orbeez popping up more and more. These fun highly absorbent balls can become significantly larger when they make contact with water, which has made them not only a fun creation but one that can be used for a wide variety of different functions. However, there have been some environmental concerns as to whether or not they are biodegradable. While they do not meet the sustainable standards for an environmentally friendly product, they are by no means overly harmful and can actually often be utilized again after their initial use. This means that there is more than one way to dispose of your Orbeez after they have absorbed water. To help you further understand whether Orbeez are biodegradable, we are going to take you through all of the different ways that you can dispose of this product after you have used it.

After years of working as an environmental scientist that specializes in proper waste disposal, I have concluded that the materials that Orbeez are made of do not qualify them to be a biodegradable product.

‍How To Dispose Of Orbeez

When Orbeez were first launched, their creator merely wanted to make a product that was highly absorbent and could be utilized to perform some vital functions. However, what they did not expect was that Orbeez could end up being used in so many different ways. Orbeez were initially created to help keep moisture in gardens by letting soil retain more water. While this was a very popular gardening technique that is still used today, people have found all sorts of different ways to use Orbeez for practical reasons - or simply for fun.

These highly absorbent polymers are now very popular among children - in more ways than one! The most practical way that Orbeez are used by kids is within their diapers. Given that diapers need to be as absorbent as possible, Orbeez were an immediate hit within the industry and were an extremely innovative approach for new products. With that being said, one of the most popular ways that Orbeez are used today is for some good old fun.

Kids absolutely love the excitement of watching these color full balls absorb and increase in size, which is why they are still so popular today. In fact, since the mainstream popularization of online video platforms like Youtube, we have watched Orbeez become an internet sensation - with viral videos online that are well into the millions of views.

With that being said, Orbeez are not just about fun and can even be used to save lives. A very common use of Orbeez is to implement them as a strategic resource during the case of some natural disasters. We have seen private homeowners utilize Orbeez in regions that are especially prone to floods and water damage. The highly absorbent balls are perfect as a preventative measure for mitigating the harmful effects of floods, as they are able to absorb a substantial amount of water - so long as flood levels do not become exceedingly high. The most important thing to do is to make sure that there are enough Orbeez and that they have been properly placed, but the question still remains, what do you do with all of these Orbeez after they have been used?

Orbeez For Your Garden

The most challenging thing about Orbeez is finding a way to properly dispose of them after they have been used. While it would be great to have them be fully biodegradable, unfortunately, they simply do not meet the conservation standards for biodegradable products, but you will be happy to know that there are some sustainable workarounds that you can implement to dispose of your Orbeez properly.

The best way to dispose of your Orbeez is to utilize them in your garden after they have been used up. In fact, the original reason that Orbeez were even created was to help gardeners retain moisture within their soil. This is still considered to be one of the best ways to dispose of Orbeez while at the same time letting them continue to serve a beneficial function.

If you are into gardening, then you know the importance of maintaining healthy, fertile soil that has balanced moisture in it. Many gardeners struggle with their daily obligations and often forget to water their garden - or simply do not have the time! Orbeez are here to save the day by taking care of the majority of your watering needs.

After you have used up your Orbeez, take them out into your garden patch and place them around the ground and let nature do the rest. However, if you want to maximize the effects of the Orbeez, the best way to get the most out of them is to dig into your soil a bit and evenly displace them. This will help the moisture absorb into the soil at a much slower and balanced rate, which means that the Orbeez will continue to moisturize your garden over a longer period of time. If you do not have a garden patch, then you can even try this with your potted plants around the house - just take the same soil mixture approach as you would with any garden.

Now, many gardeners are often concerned that the Orbeez could harm their soil - given that this product is technically not biodegradable, it is easy to understand why this could be a factor. Luckily, Orbeez are made out of materials that are not harmful to the environment. This product does not contain any toxic chemicals and will naturally break down in your garden over time with no harmful effects being done to your soil or your plants.

If you do not happen to have a garden to dispose of your Orbeez, the next best approach is to simply throw them away in your trash. This product is unfortunately not recyclable and does not contain natural materials that make it worthy of composting.

With that being said, disposing of Orbeez in your trash is just fine and will actually be a much less harmful waste material than most other things that end up in landfills. Given that Orbeez are made out of polymers, you can expect them to break down and biodegrade relatively fast - roughly 7 to 10 years.

This is a much better timeframe for waste to biodegrade than plastics, which can take hundreds of years. However, unfortunately, Orbeez has not been modernized to environmental standards that demand that biodegradable waste break down in a matter of months.

When you dispose of Orbeez in the trash, you want to make sure that they have been properly stored or sealed in some sort of container. Given that you will likely be dealing with hundreds of tiny balls, it can be a bit challenging to contain all of them and keep them from going all over the place. This can be especially problematic if your waste disposal service mismanages their trash, which could result in all of your Orbeez separatings and ending up in the environment.

In addition, you do not want to dispose of Orbeez in a way that enters your plumbing. While this product is viewed by conservationists as being relatively harmless, the improper disposal of it can have damaging effects on the environment. If you dispose of your Orbeez by putting them down your toilet are pouring them into your garbage disposal - or even directly into your sink’s drain, you increase the chances of them causing harm to the environment.

If Obreez enters the sewage system, they increase the risk of your plumbing flooding or even creating issues for waste treatment plants. This can be especially problematic if Orbeez enters your plumbing completely whole, as this greatly increases the likelihood of them causing problems. However, the waste disposal issues that Orbeez can cause do not stop with your plumbing, as they can pose a threat to marine animal species.

Unfortunately, much of the world’s trash does not always end up in a landfill - with so much entering our oceans. When Orbeez find their way into the ocean they end up causing damage to marine ecosystems and can be quite destructive. In addition, small products like Orbeez can often be mistaken by marine species as food and they will often eat products that their metabolisms can not properly digest, which results in severe discomfort or even death to the animal.